Making the most of the FIFO lifestyle

A quick break from boatbuilding. There's been quite a lot of media coverage of late on an enquiry into a spate of suicides of Fly-in Fly-out (FIFO) workers here in WA. I work in remote WA, though not, unusually, at a mine. So I've been taking a keen interest in the coverage that's been going on, and engaging in some thinking (there's plenty of time out here for thinking) about what works and what doesn't work when you're away from home in the middle of nowhere for a significant part of your life.

This article by Wenlei Ma gives, I think, one of the most coherent accounts of what FIFO work is really like. The key to the difficulties aren't so much the work itself, which is hard, hot and dusty, but more the challenges of being away from family with very little to do but miss home, and the possibility for friction between colleagues in what's effectively a tiny condensed country town.

The other week RED FM announced a competition, called "show us your donga", with a $1000 travel voucher for the donga judged best in the state. I got enthused about that and figured I'd take a decent photo of mine, but then read the fine print of the competition and decided not to enter. Instead I figured I'd share the photo here.

We've got a reasonably good deal at my workplace. Some things really need improvement - for example our accommodation dongas are very basic. There's no shade, very few facilities, lots of dirt everywhere and no FIFO pay (unlike the mines, which shower their FIFO workers in allowances). That said, the huge salaries that mining FIFO workers get are a trap in themselves, encouraging high debt levels and creating a position where people who can't cope with the lifestyle feel trapped. On the plus side we have very good food, very short rotations (five days on, two days off), good communications with home, a great bunch of guys to work with and a very relaxed informal atmosphere where we're encouraged to personalise our rooms, which you'd never get on a mine camp.

So here's what my room looked like when I moved in, a couple of years ago (this is actually a neighbouring room, as mine was already well customised by the time I thought to take a photo). Spending too much time in a room like this is sure to do your head in. 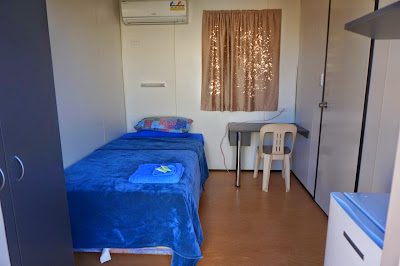 Because we're a pretty small operation, we don't have much in the way of recreation facilities. We essentially have a 3m x 3m rec room with a telly and a sofa, and a small gym room. While I get on really well with my workmates, I also really value my time away from them. It's plenty enough to be working a ten hour day, plus eating meals together. When I'm back at camp (around 14 hours a day) I mainly stay in my room, which I see (and my workmates respect) as very much my space. This allows me to relax and recharge, and gain some outside perspective, so I can start the next day fresh.

So over the couple of years I've been working out here I've done what I can to improve the place. I started by buying a television and bringing an old home theatre PC from home so I could watch movies and listen to music stored on a hard drive. Since then my employer has cottoned on to the television thing and bought us all nice 32" LCD televisions with satellite decoders, so I can watch the same crap on TV that everyone else does. I've also got an Apple TV so I can download movies, TV shows (I'm a huge Orange is the new Black addict) and music from itunes. We organised telephones for rooms where people wanted them, and we have really good internet, so I can chat with Perry on facetime whenever I like and for as long as I like.

This is a really important part of coping with working remotely for so much of my working life. We chat every evening at 7pm, just after dinner via facetime. We ramble on about what's happened that day for half an hour, I try to engage the cat in conversation (he always ignores me), and we just do what we can to alleviate the isolation that both of us feel when we're apart.

So after getting the comms going nicely, I set about making my room less stark. I bought carpet tiles from Bunnings and made some nice curtains with proper sheers and tie backs so I could get some light into the place without people walking past looking into my room. I brought out my own doona and pillow, and brought out a set of shelves so I had somewhere to keep things. Mainly lots of bad fantasy novels and junk food.

The wall alongside the bed is shared by the next room along. While my neighbour is as quiet as a church mouse, I'm really conscious of not making too much noise. So a lot of what I've done to the room is about making it so I can listen to music etc. without annoying the neighbours. I'm generally lying in bed while doing this stuff, so installed a couple of little Cambridge Audio speakers either side of my pillow. They're right by my head, so provide really good audio at quite a low level - I can be listening to music or a movie, then sit up and hear stuff all. Just like wearing headphones, but without getting sore ears. I built a nice little 10W MOSFET amp to drive the speakers, which has super low noise and distortion, and have an easily accessible volume control just by the bed.

To further cut noise down, I put a sheet of gyprock up (painted red to further personalise things) between myself and the neighbouring room, with sheets of sound absorber goop underneath it. Shortly I'll fill in the rest of the wall above the bed with a long bookshelf, providing even better sound attenuation.

We upgraded our coffee machine at home, so I took the old one to my donga. It's pretty cool to be able to make myself a really nice cuppa in the morning. Sometimes of an evening I use it to make hot chocolate, and I have a stash of marshmallows for just this, along with licorice of various sorts (I'm an addict) and some booze.

Finally I built a nice shelf to put my satellite decoder on from Tassie oak and some offcuts of marine ply under the telly, and some better shelves under the desk. The result is really comfy and homely. 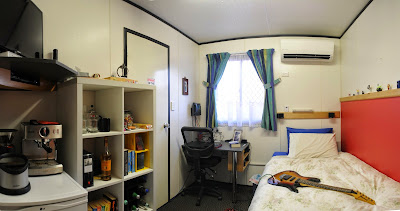 The sound system also allows me to mask the drone of the airconditioner. It gets to 48 degrees at the height of Summer out here, and often doesn't fall below 30 at night, so for a few months each year we have to run the airconditioners 24 hours. I find if I have some music playing quietly, I'm able to sleep a lot better than just listening to the aircon.

Wow I didn't realize you had a guitar in there too. Alex has drums, Michael can sing, you guys should start the most amazing rock band in Murchison.

I enjoyed having a little project to come back to out there too.

I miss the desert and the awesome team out there.

We miss you too! Hope the East is treating ha well.