John Welsford recommends starting the planking at the aft end of the boat. This way you get a little practice before hitting the bow, which I'm led to believe is rather hard.

We started by buying more sheets of 6mm ply. I didn't have easy access to a trailer for this lot, so instead bolted some 2.4m lengths of pine to my roof rack, and clamped the sheets of ply to that. It worked rather well. 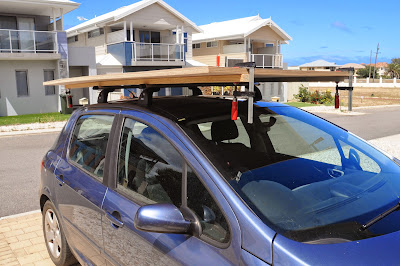 We used a scrap bit of ply to "spile" the plank. This was done by ruling lines along the ply at regular intervals, clamping it where the plank would go, then measuring off the end of each line to where the floor and first stringer are. I wrote these numbers on the spiling plank, then transferred the points to a sheet of ply, interpolated with a batten, and cut the plank out. I spent a little time finessing the join between the plank and floor, then duplicated it for the starboard side. 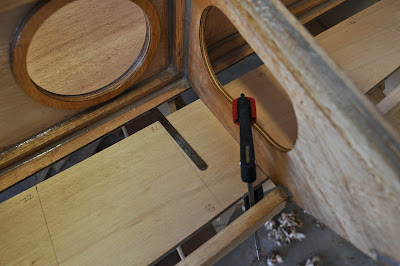 I did a proper dry fit and finessed the lower stringer to ensure everything pulled in nicely.

Once I was happy it fit, I drilled some holes in it for ties, mixed up a batch of goop and stuck it on the boat. I repeated the process for the starboard side, then for the next plank forward, which goes all the way to just forward of bulkhead 3. The photo shows the port midships lower plank setting up. Lots of clamps, and lots of copper wire ties. This is as much as I'm comfortable gluing on in one go. I had to work faster than I like for fear of the goop going off before everything was clamped up. As a result I think I got as much goop on myself as on the boat.

The midships plank is joined to the aft plank with a simple doubler. I was originally going to scarf the plank, but figured I'd just (for once) follow instructions. It turned out nicely. 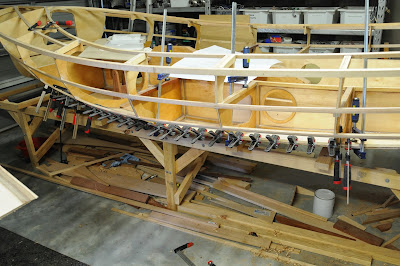 Once the dust settled from my panic, I pulled the ties, cleaned up the excess goop with hot air gun and scraper, and layed in some fillets. Then I put a layer of 70mm wide 200gsm fibreglass tape along the seam to strengthen it. 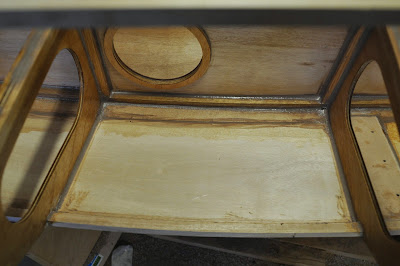 Here's the open area amidships. I've done both sides up to bulkhead 3. Now for the dreaded bow end...