One of the challenges I'm having is getting materials to build my boat with. I live in Geraldton, Western Australia (not to be confused with the other WA). It's about 450km north of Perth, the capital of WA. I rather like bronze, but none of the local metal merchants stock it, none of the Australian mobs I've found are interested in small quantities, so that leaves American online mobs.

I bought a piece of C220 bronze sheet from McMaster Carr recently to make bits from. So far I've used some to make plates to support the becket on my centerboard uphaul, and the cover plate featured in my last post on the front thwart. McMaster advertised a 2" x 24" x 0.09" piece of bronze for US$41.27. Expensive, but them's the brakes. I ordered it, and it showed up a week or so later. The cost on my card: AU$106.72. So the shipping was just as expensive as the metal.

So I asked on the woodenboat forum if there were any alternatives to McMaster, and found online metals. They will cut sheets to fairly arbitrary sizes, and are at least upfront with shipping. I tried a 12x1x0.125" piece of 220 bronze. US$14 for the bronze, but a staggering US$123 for shipping. Just for fun, I tried a 1x1x0.125 piece: 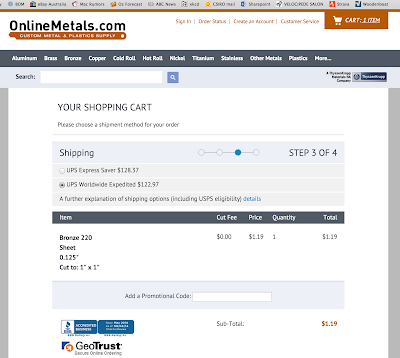 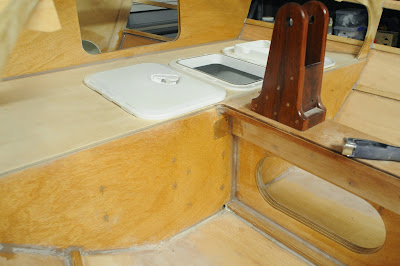 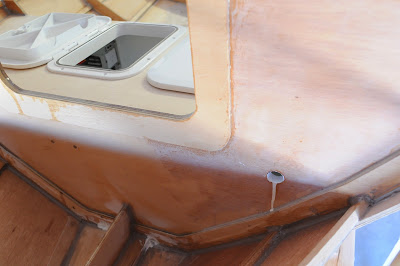 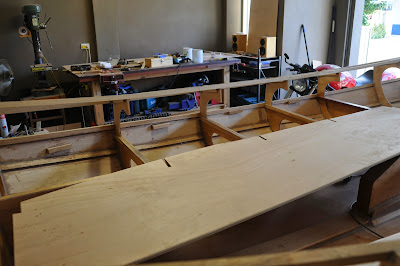 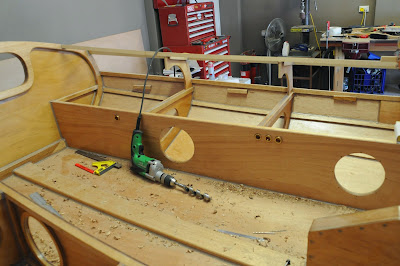 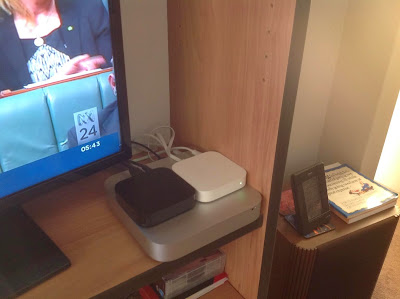 Edit: But wait, there's more! Another incantation is needed before my Apple dvd will talk to linux.
Posted by Suzy at 07:04 3 comments:

More planking, and starting to finish out the thwarts

With the second course of planking done, a little bit of thought needs to be put in to what's next, as access to various bits of the boat gets much harder as the planks go on. 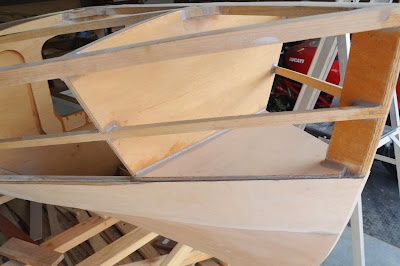 Similarly, once the third course is in, I've really got to do the front thwart, as the top for it only barely fits between the stringers where the fourth (top) row of planking go. Finishing out bits like this provides a useful relief from the monotony of planking, though doing fillets is one of my least favourite jobs. I've got a good recipe for the aquacote epoxy undercoat and polyurethane topcoat now. After getting the fillets to a state where they don't look revolting, I put on an even coat of unthickened epoxy with a foam roller. Then I sand that smooth with 80 grit, and apply two coats of undercoat, again using the foam roller, with a paintbrush for the fiddly bits.

The trick with the undercoat is to apply a very thin initial coat, wait about two hours for it to get super tacky, and apply a second slightly heavier coat. That way there are no runs and good coverage.

Finally I do three coats of topcoat, again using the brush to get paint into corners, and smoothing everything over with a foam roller. 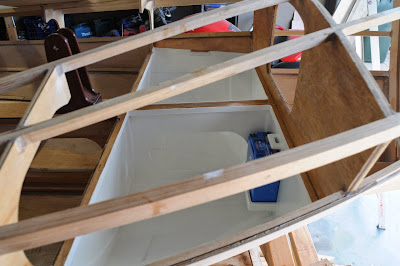 Here's a close up shot showing my battery mount. The plan is to hide an Icom IC-400BB marine radio in here, with the controls on the handpiece remoted back to the cockpit, plus a Vesper marine XB-8000 Wifi AIS transponder so we can see where other shipping is, and they can see us. The 20Ah battery will provide oodles of life.

The battery will be secured with a strap and clip, so it'll stay put even if we capsize. 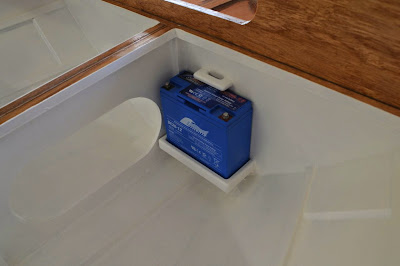 Here's a photo showing the lid on the thwart. I've run out of epoxy filler, so am champing at the bit until more supplies arrive, at which point I'll finish this bit off and get back to planking. 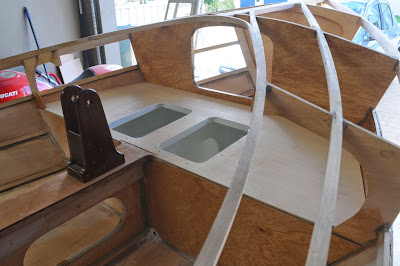 Finally I took a break from boat building to bake some stuff for a work Christmas party. Guess where the cat wanted to sit. 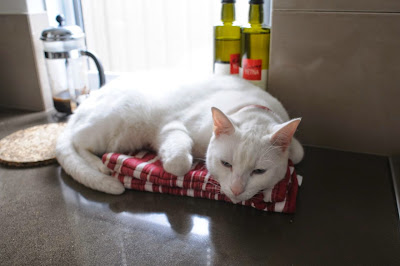