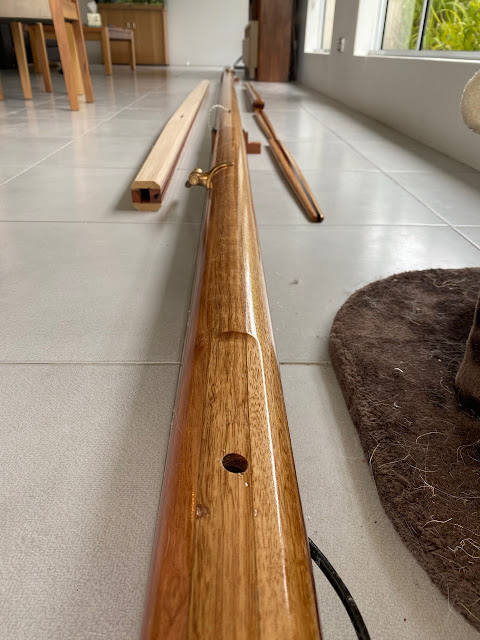 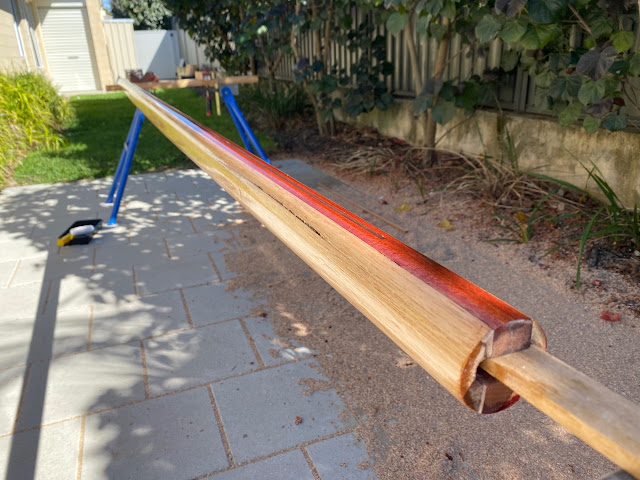 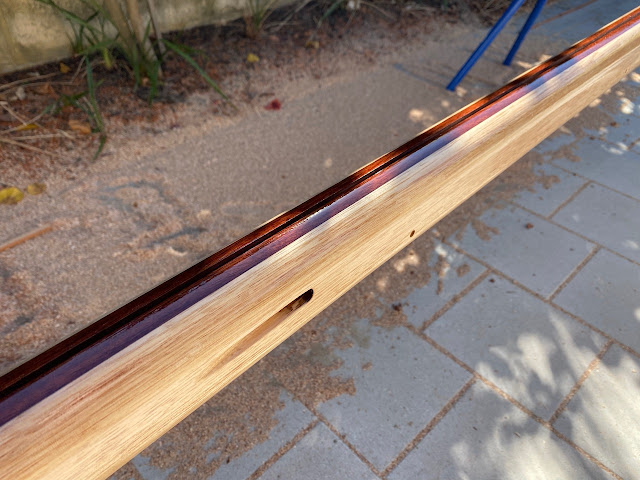 Having rounded out the mast and smoothed it down some, I wanted to put the hole in the bottom for the tabernacle pivot. That meant fitting it to Elena and standing it up.

While the drill bit was still in the hole, I thought I'd have a go at stepping it single-handed, as one does. I started by extending the jib halyard to the bowsprit, and attaching it with a simple bowline. The mast was resting on the transom bridge, with a couple of towels ensuring paint doesn't get scratched. 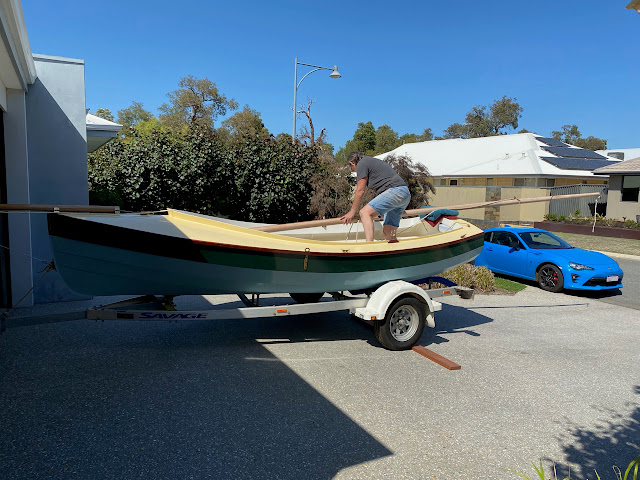 Then I lift and walk forward: 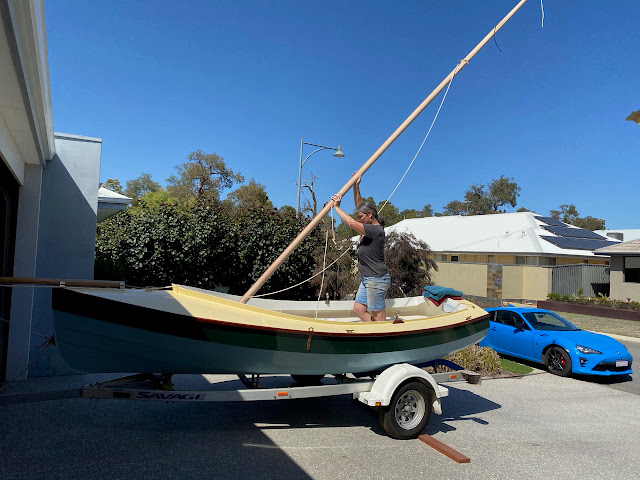 Start pulling the halyard through while supporting the mast: 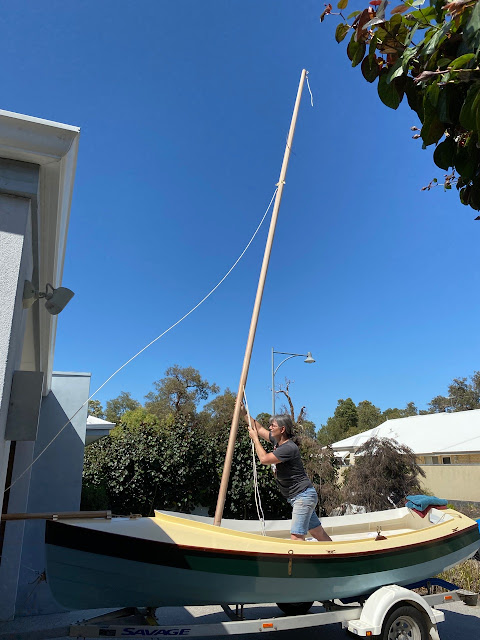 And give it a bit of a yank. 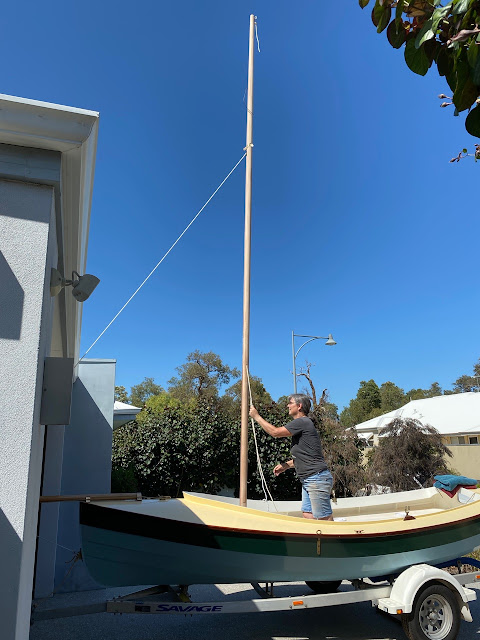 I've got no cheek blocks on the tabernacle yet to run the halyard through, so the drill bit will have to suffice: 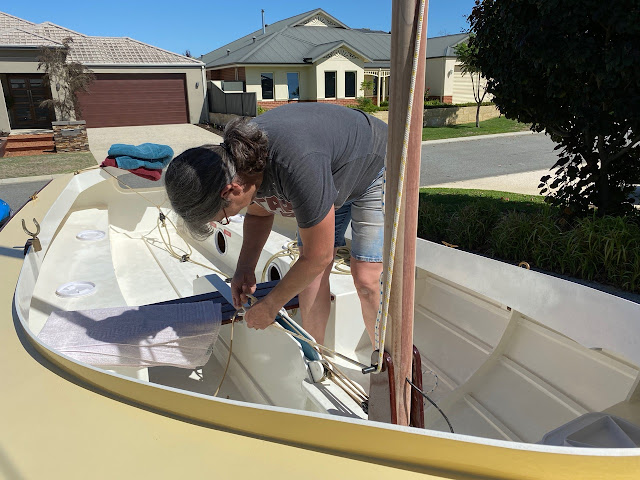 I reckon that looks proper nautical. And I don't reckon there'd be that many Jarrah and Tassie Oak masts around, either :) 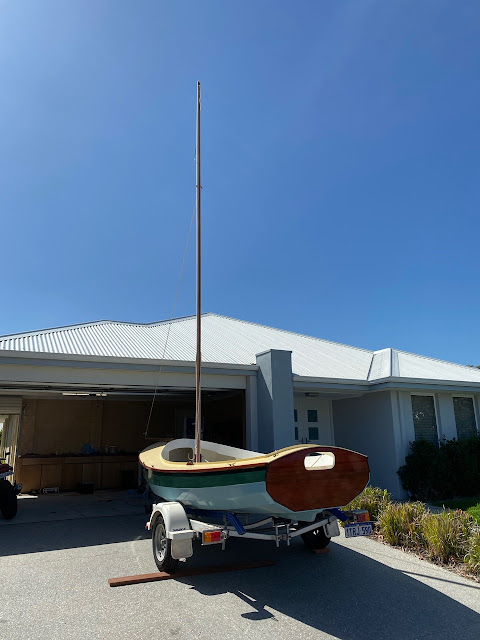 Making a proper start on the standing rigging.

I ducked out to the chandlery today to pick up more epoxy to put the last stave in place on the mast.

While I was there I grabbed some 5mm SK75 Dyneema line and some thimbles, for shrouds and bobstay.

I've made up the bobstay so far - as simple as a brummel-lock splice over a thimble on each end. This is actually go three on the bobstay. I really don't want wire, as bobstays are the sort of thing you grab on when you're swimming around the boat. I originally started with a bit of 5mm chain. That works very well but looks a bit over the top. So then I swapped that out for 8mm Spunport double braid polyester, which certainly looked the part, and was nice to handle, but was really springy.

The Dyneema bobstay, on the other hand, is rather remarkable. It's very twangy, and I feel I could pull the heel Iron right off the deck if I keep turning that turnbuckle. I'm able to put a lovely bend into my bowsprit, and it still looks and feels right.

The brummel-lock splices were quite straightforward. The dyneema comes apart nicely and I reckon I could feed the whole eye through, which I might try on the shrouds. 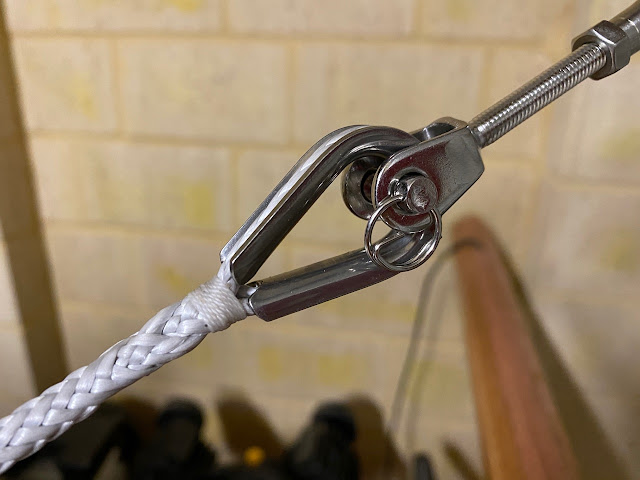 I added some whipping to tighten the eye on the thimble a little.

And here's the whole bobstay. I'm vacillating on the turnbuckle, as a couple of blocks or some form of lashing will undoubtably be quite a lot quicker to set up. 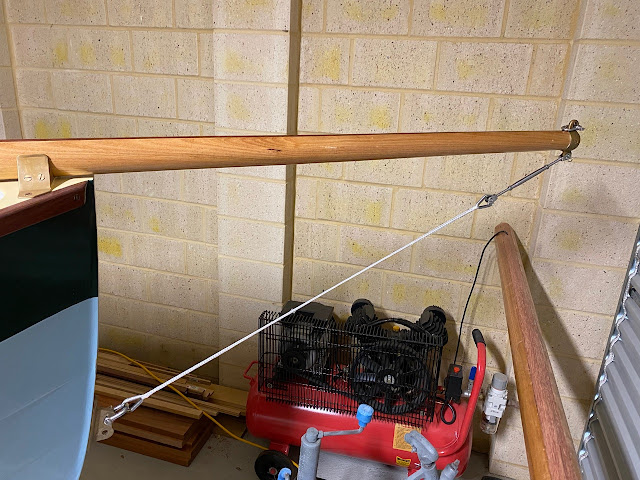 Speaking of quick setup, here's what I propose for the shrouds (using the bobstay as an example. The 5mm SK75 with thimbles is simply lashed to the chainplate with 6mm spunport, which is then secured in the cleat aft. I think that will be really quick and easy to tension. 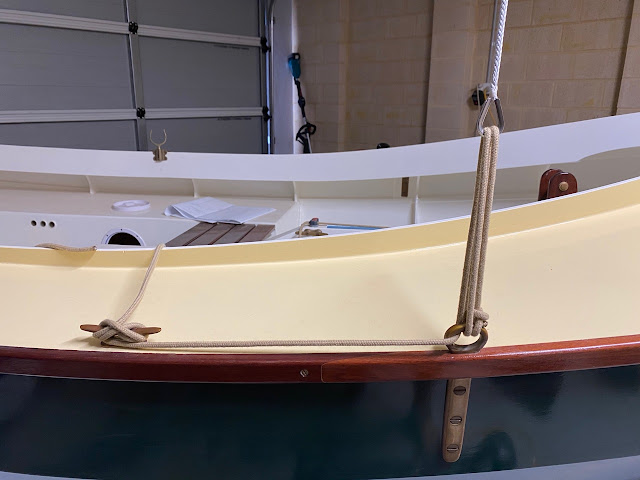 Making it round (or at least oval)

I fibbed a little in the last post. I wrapped the very last stave in plastic when I glued everything else up, so I still have access to install halyards etc in the mast once it's completely shaped. Otherwise the bits around where the halyards and antenna exit would be very difficult to work on. 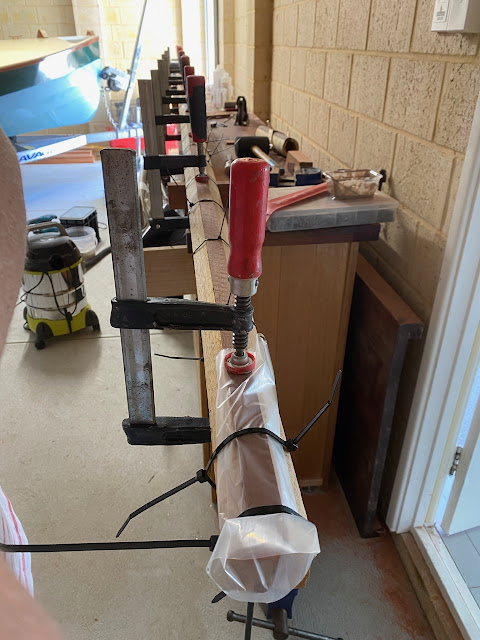 With the mast in a state where it holds together reasonably well, I started shaping. First step was to mow down the rear either side of the sail track to make it an elongated octagon: 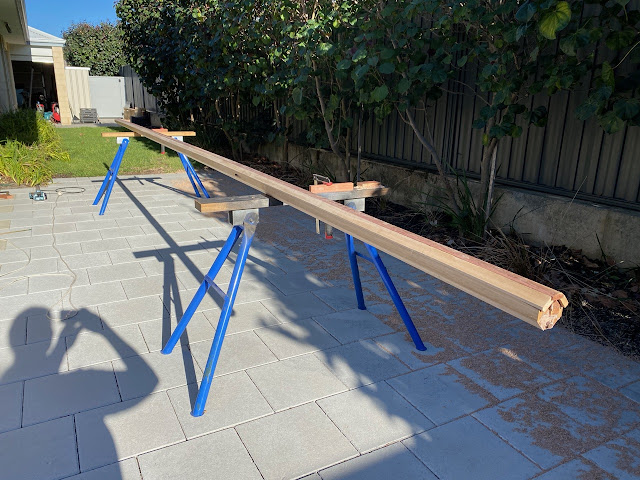 I went straight to the motor mower power planer for this. Otherwise the effort would kill me. I also did the work on the patio, where all the mess can simply be swept into the compost heap. 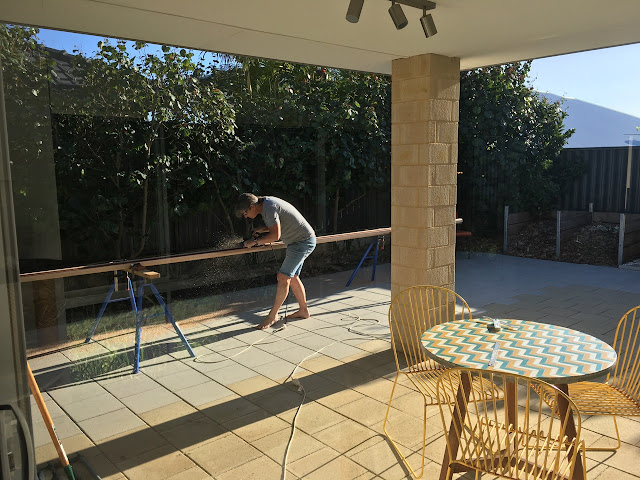 At this point I knocked a couple of cradles up to hold it, as once it gets more round it won't sit on a flat surface nicely: 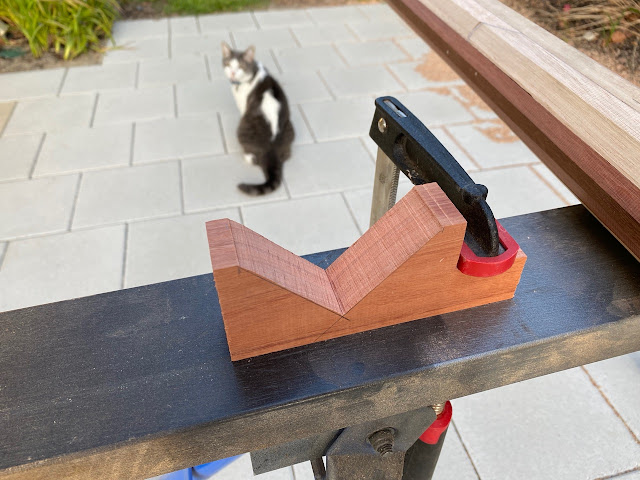 I next went for a hexadecagon (being an engineer I didn't even need to look that word up). 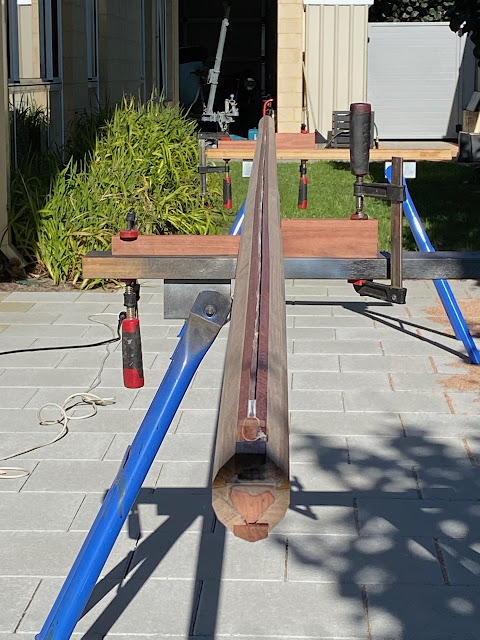 It's getting reasonably light at this point. I reckon 12.9kg for a 6.1m mast isn't too shabby. 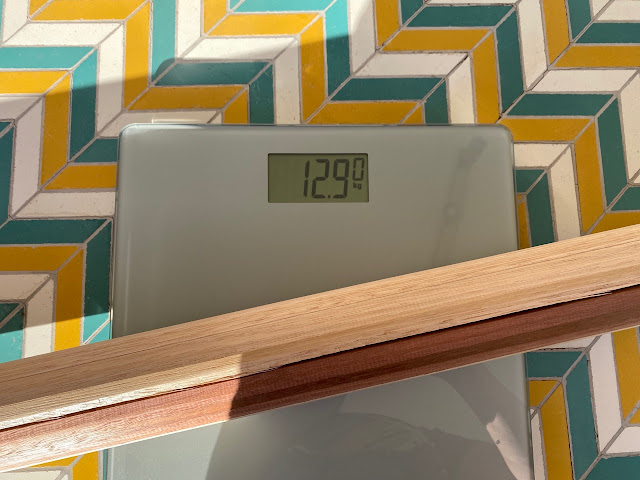 I also flattened the sides for the bottom 28cm, to make it work nicely in the tabernacle: 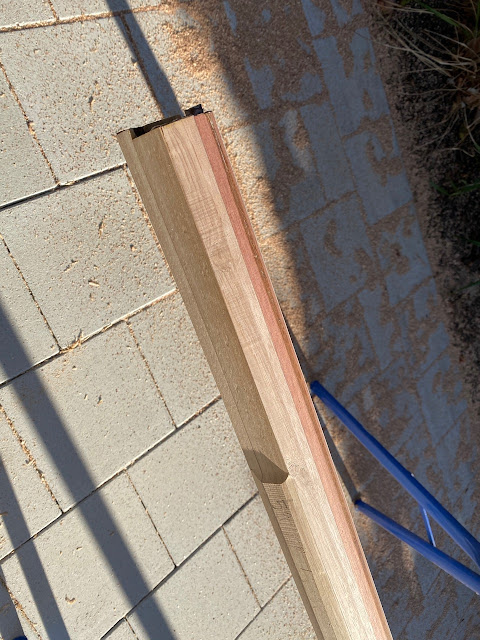 Which necessitates a quick test fit in the tabernacle. It's a little on the tight side, but once I'm done with sanding I reckon it'll be just about right: 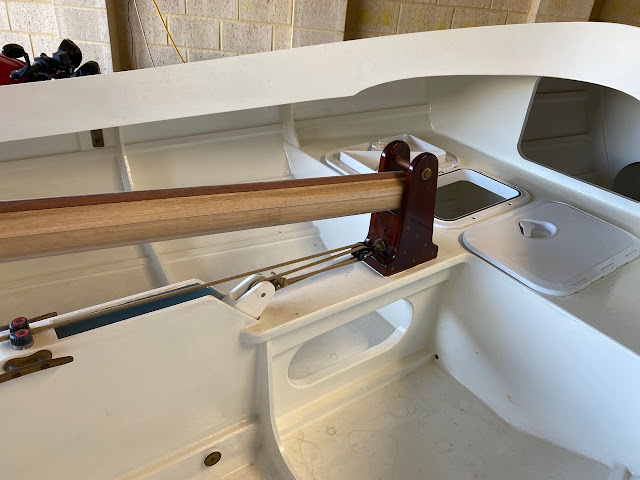 My god it's long: 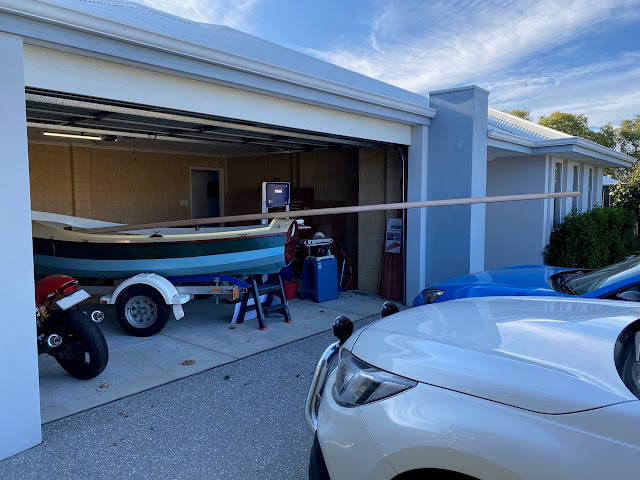 Back to the planer to make it a triacontadigon (yes, I had to look that word up), plus a lot of fussing and finessing with 0.3mm deep cuts to get it as straight and even as possible: 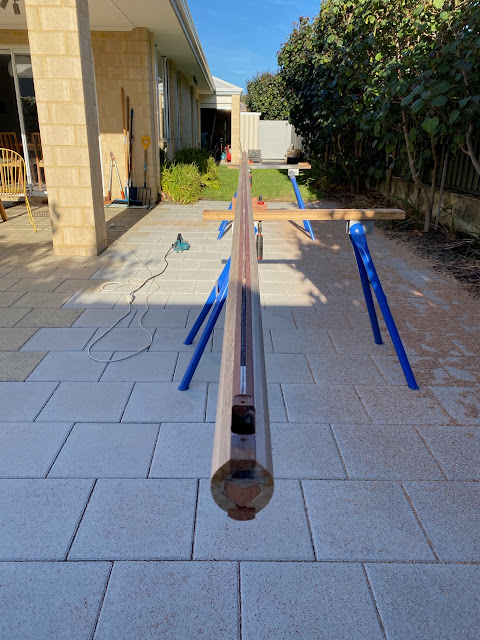 And now the really hard work begins, using a 40 grit belt sander belt to make it round: 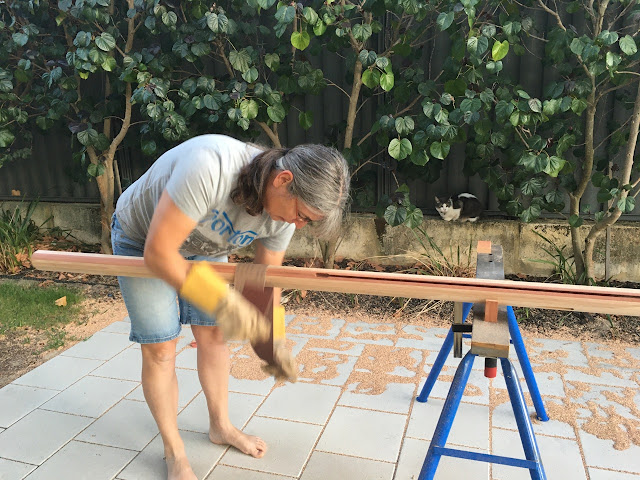 Closing up the mast

With the successful work on shrouds etc, I have the details that I need to now confidently close the mast up.

First I made a plug to reinforce the shroud and jib halyard exit box area. 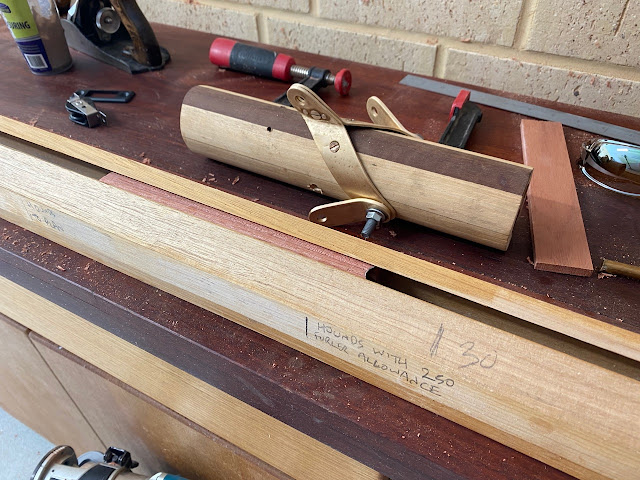 This has a diagonal channel inside for halyards.

I knocked up a little piece of Jarrah to close up the top. 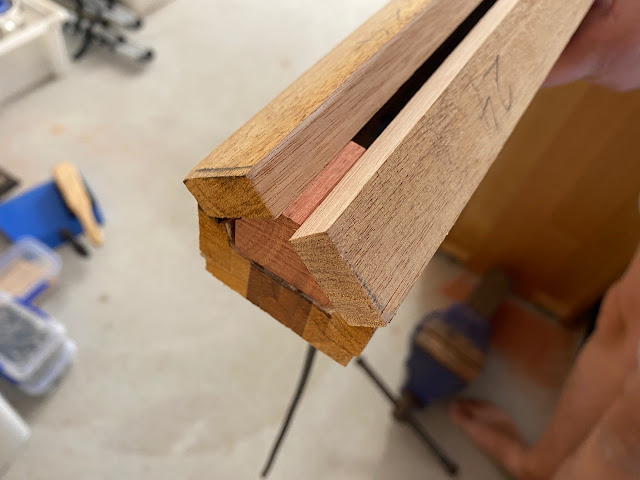 And finally I tapered the last three staves, and cut fishmouths into two of them, so now it all sits neatly. 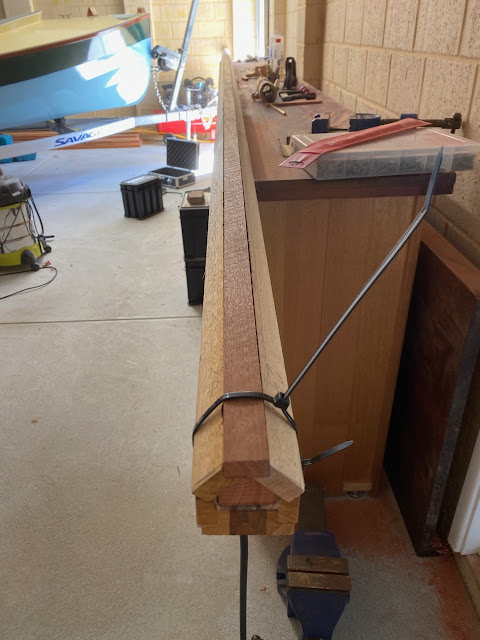 The good news is that I can lift this by myself even now. From here it's only going to get lighter as I plane and sand the mast into an oval.

Now to mix up a heroic batch of epoxy.