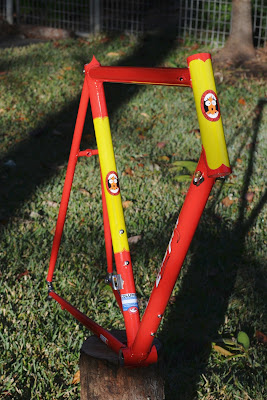 So we're assembling Ben's new bike on the weekend. I told him when he dropped by last Sunday that he could look but not touch, and that he wouldn't be allowed to touch for a week, while the clear set up nice and hard.

Here are some nice pics of his bike in the dawn light to tease him. I don't think detailed descriptions are necessary. I'll let the photos speak for themselves. Firstly the seat lug: 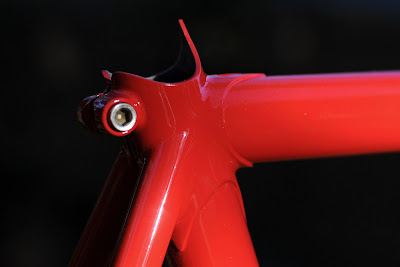 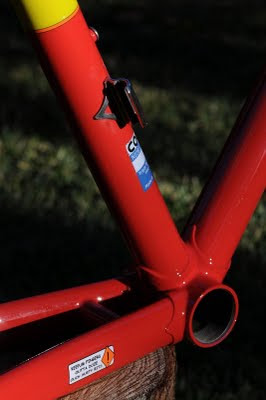 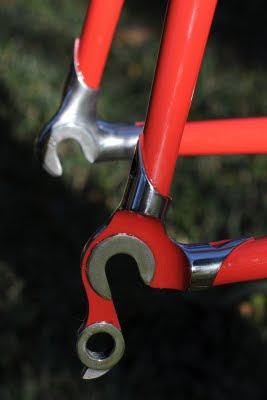 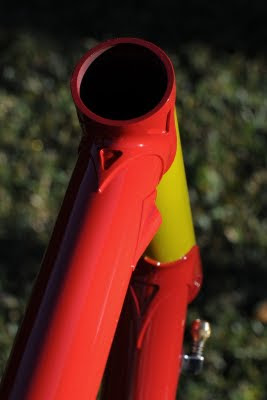 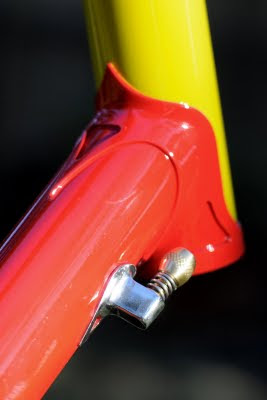 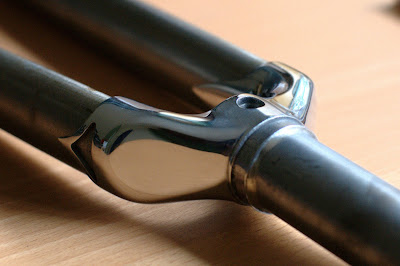 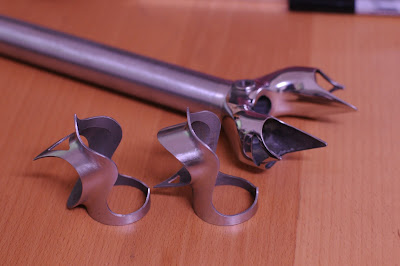 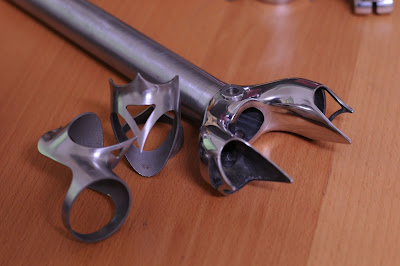 What have we here?

A lovely package arrived in the post yesterday. I opened it up and a whole bunch of tubes fell out. What sort of tubes could they be? Columbus Spirit for lugs, of course, in OS. This stuff is about the pinnacle of tubing. All Nivacrom, lovely thin walls, but with friendly butted sections suited for lugged construction. 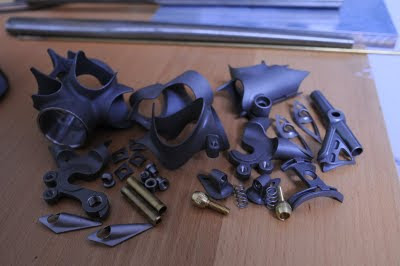 More of the package revealed some lugs. These are Llewellyn custodian lugs, in OS size, and in stainless.

Aye, that be right, this one's going to have stainless lugs, and Spirit tubing. Alas it's not for me - it's for Keith. I just get the joy of knocking it together. :)

Keith is a really good mate from way back - He's the sort of guy that's just perfect to sit on - a big hefty sprinter. I've watched his arse for many thousands of kilometres, which is as it should be, because the alternative is not being able to get on his wheel when he decides to sprint. 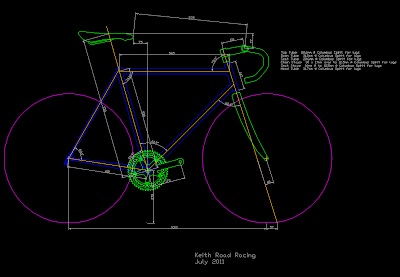 Keith surprisingly has very short legs. He's a reasonably tall boy, but clearly all his height is in his torso. His off-the-peg Pinarello is a 54, which has a 52 seat tube and 54 top tube. In order to fit on it, he needs a 13cm stem and he pushes the saddle all the way back (9cm from saddle tip to BB), which can't be good for his knees.

I went for a 53cm seat tube (about the same standover height as his Pinarello), but put an extra 3cm in the top tube, for 57cm. This allows him to use an 11cm stem and just 7.5cm saddle setback, but get the same saddle-bar distance. The hope is that he'll be more comfortable and more able to get over the pedals when he sprints. I've set the bar drop the same as his Pinarello - 7.7cm, but allowed provision for him to drop the bars significantly once he gets used to the slightly more aggressive geometry.

Dazza was aghast that I ordered stainless lugs without ordering the parts for a fork as well, so I've relented and will do a matching fork. This is using parts I've had kicking around for a while - a 1" Columbus EL steerer, Columbus Nivacrom blades, and a Long Shen stainless crown (which I've already polished up). This should build up a lovely light fork.

Here's the ingredients that I'll use to make Keith's frame:

The head lugs, crown, dropouts, derailleur tab and STI bosses will all be polished. I'm still vaccilating as to whether or not to polish the seat lug. If I do, I'll really have to change my usual fastback seat stay attachment style... Anyway, I'll see. In the meantime I'll get to carving the lugs. 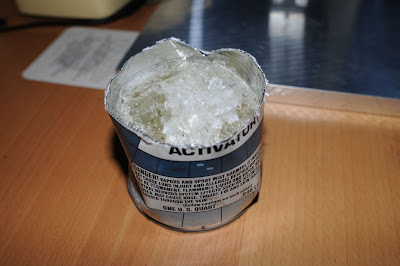 So this is the activator for my clear coat. Clearly I won't be finishing Ben's frame this weekend.

This puts me in a bit of a bind - I have a couple of litres of Imron clear, and about half a litre each of red, black, and white. They all use this activator. Unfortunately the mob I buy my paint from no longer stocks Imron, and I'd prefer to go with the DeBeer product that they're selling. That means effectively chucking over four litres of paint.

Oh well, I guess I had to make the change at some point.
Posted by Suzy at 15:19 No comments: 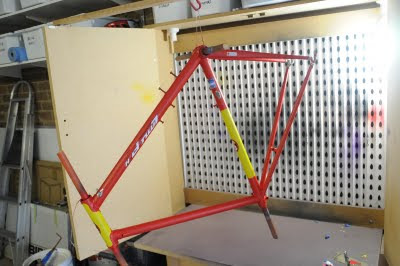 Ben's bike has paint on it - the colour scheme was his idea, to match a favourite jersey. I think it looks kinda cool - certainly very bold.

I've just put the decals on, and am leaving it overnight before putting the clear coats on. This is how the auto-air paint looks immediately after spraying - a nice satin sheen. It's terribly delicate at this point- hence hanging up. 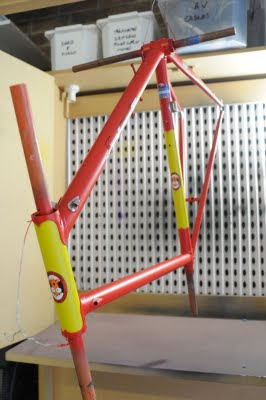 The head tube took a fair bit of patience to mask - I found the trick was to use lots of very small bits of tape, and to press each one carefully into the shoreline with a biro before cutting it with a scalpel. I did the yellow panels first, then the red. On the seat tube there are little orange decals at the transition between yellow and red.
Posted by Suzy at 13:15 1 comment:

So after a few nights through the week burning the midnight oil (or is that LPG?), I'm at the point where Ben's frame is ready for paint. This is where I think frames are at their most beautiful, before the paint (however thin) hides all that delicate detail. Anyway, here are a bunch of pictures.

Please do click on the pictures to see larger versions. Those that come up in the blog are rather small.

Starting with the head tube. I polished up the nice little Llewellyn ergo bosses. They're fitted with brass adjusters from Ceeway. As mentioned in previous posts, the head lugs are Llewellyn Cadenzia, with added cutouts. 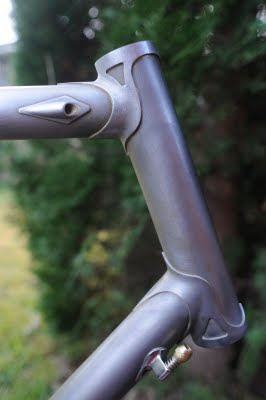 More detail of the lower head lug cutouts, and showing the shorelines. 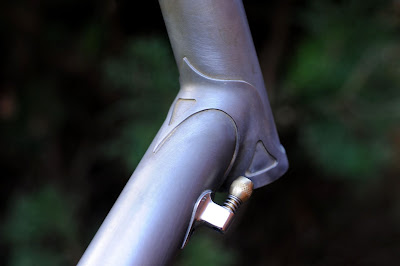 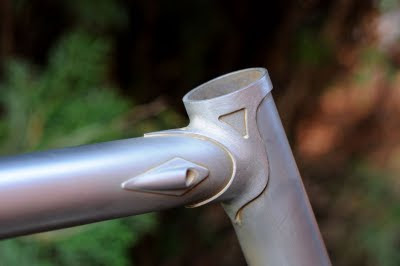 Turning now to the seat lug, you can see the difference that taking material off the rear skirt section of the lug makes. I think it looks a lot cleaner and more minimalist that the original lug. The seat stays were brazed on with system 48, which builds lovely fillets at silver temps. 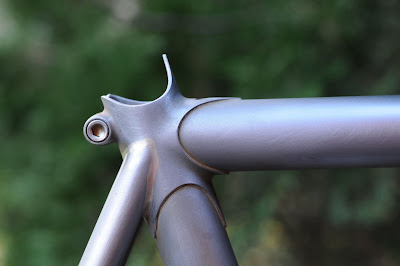 More detail of the seat lug. Here you can see the shaping I do to the back of the binder. I love the shape of the top of the Llewellyn seat lug - very organic. 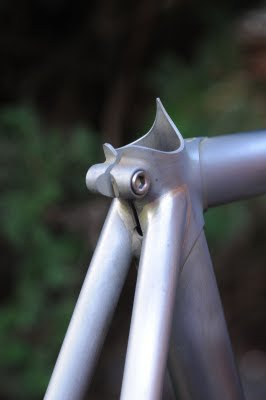 A shot from the other side shows the rear brake cable port, which is in the conventional position. Also, the triangle cutouts. I really like like how these turned out, and will definitely do them again on subsequent frames. 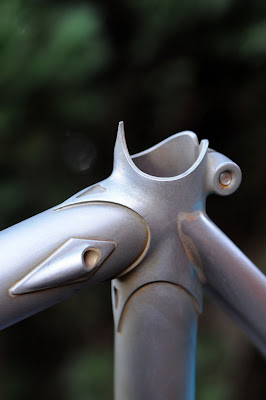 The brake bridge. What can I say? It's the bit you bolt the rear brake to. These bits can actually be a little annoying to braze, as the goal of keeping the cutouts free of silver while putting a fillet on the bridge just a couple of millimetres away is rather contradictory. This is where teeny tips are used. 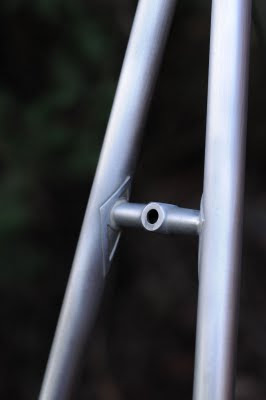 The dropouts. My fingers are sore. 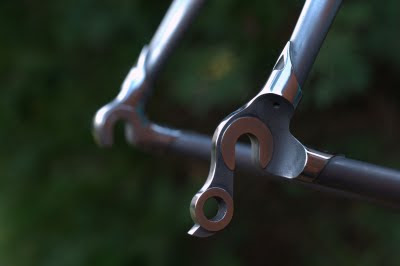 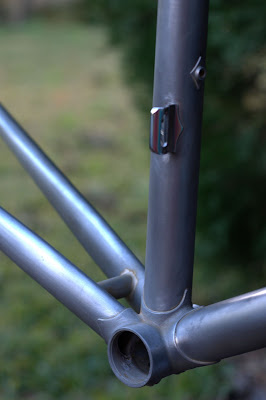 More detail of the bottom bracket, showing the neat shorelines that are possible with system 48. This stuff builds bigger fillets than 56%, but cleans up readily. The neat thing is that it fills gaps. 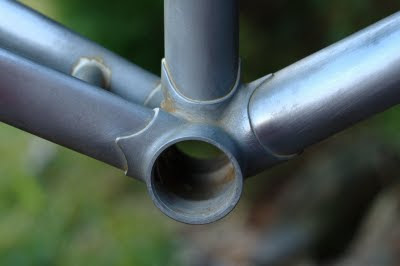 And finally the whole thing, to put everything in context. I think the XL tubes look good on this size frame - they make a frame that otherwise would look spindly look more normal. This is 57cm long and 58 tall. It's probably about the smallest frame I'd want to do with XL tubes.

For reference, the frame weighs 1950g. That's for Columbus Life tubes. Contrast that to the 1680g I got for Kristyn's compact frame, with cheaper Zona OS tubes. Yes, the frame is bigger, but I think the XL tubes do have a bit of a weight penalty. 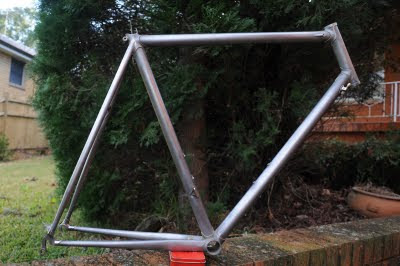