I put the starboard garboard plank on yesterday. Much the same process as with the port side. However when I went in this morning and removed the clamps, I found this: 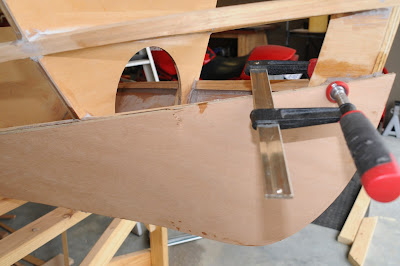 Here's a closeup of the split. It looks like the ply has delaminated. 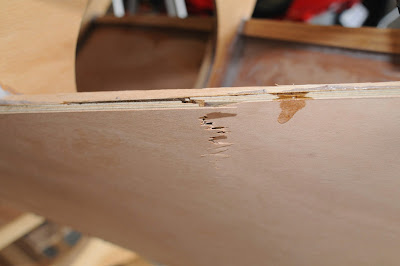 What to do? It looks like the split is mostly in the area where I'll be cutting a gain. Could I fill it with epoxy and clamp it up? What's going to happen when I cut the gain? I imagine taking the plank off will be a huge awful job.

Edit: On the advice of the incredibly helpful crew at woodenboat forum, I tried injecting epoxy to relaminate the ply. I figure if it doesn't work, I'm no worse off - I just cut the plank away and start again.

Here's where the shameless cheating begins. I've been trying my best to use mainly hand tools building my boat; my spokeshave, an assortment of planes and chisels, I even find I grab a hand drill in preference to the electric one. All that just went out the window. I borrowed a pneumatic paste dispenser and went at it with that. This little gizmo is unlikely to be found in most garages...

So the cheating begins by mixing up a batch of epoxy. I'm going to be forcing it down an 18ga needle, so it has to be free of lumps. I use a strainer to ensure the silica is non-lumpy and add enough to get a cream consistency. 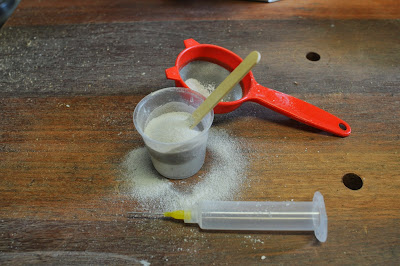 Then the stopper goes in the syringe, and the syringe is loaded into the dispenser. This tool is designed for dispensing tiny dots of solder paste for PCB assembly. Solder paste is thick goopy stuff, much like glue.. It works by putting a carefully metered air pressure on the back of the stopper. 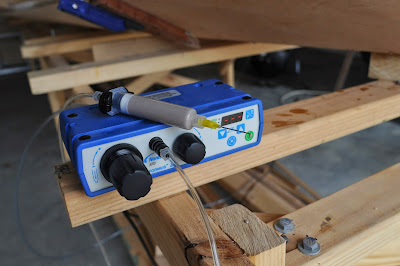 So the needle goes deep into the split, and I pump epoxy in. I filled it with about 1.5ml, at which point it was starting to run out. 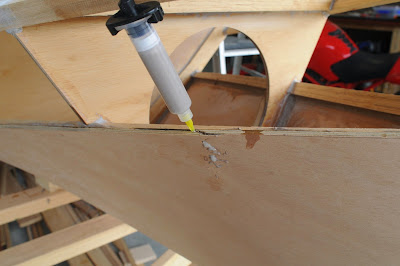 Finally I clamp it with a piece of ply and some plastic builders film up against the face. I got good squeezage out the top, so there's a good fill of epoxy in the break. 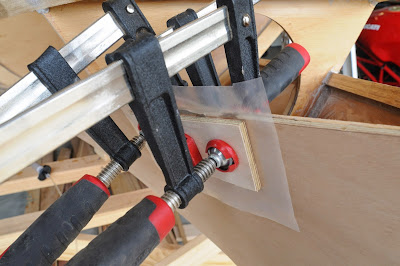 Second edit: Here's the result after taking the clamps off this morning, giving it a wipe with 80 grit, and using the spokeshave to trim the plank down to the level of the stringer: 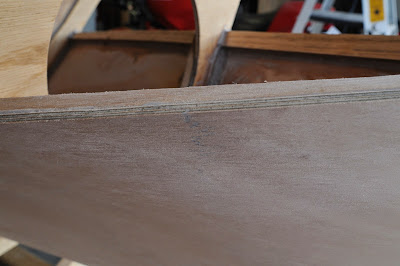 She is back to being perfect.

That were lucky nipper !