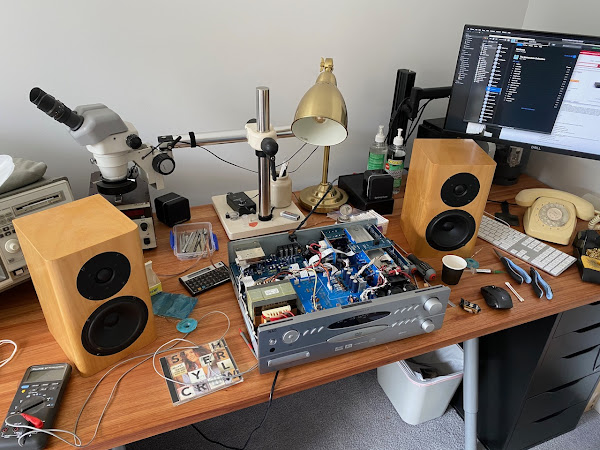 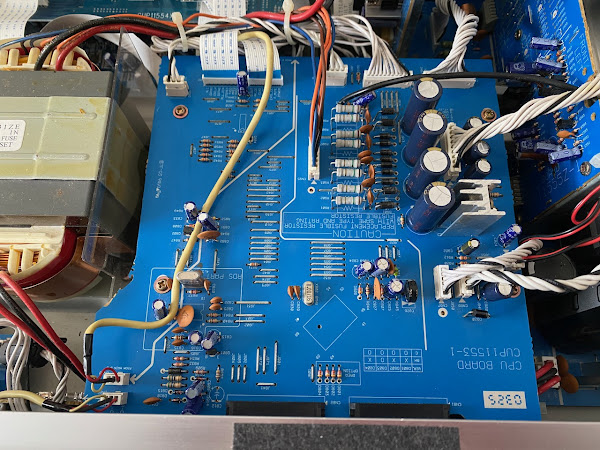 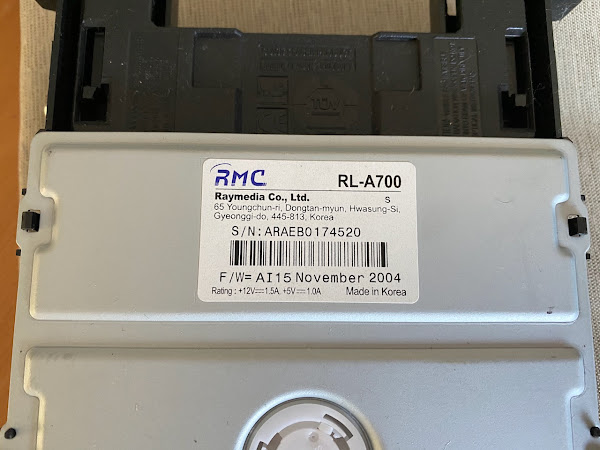 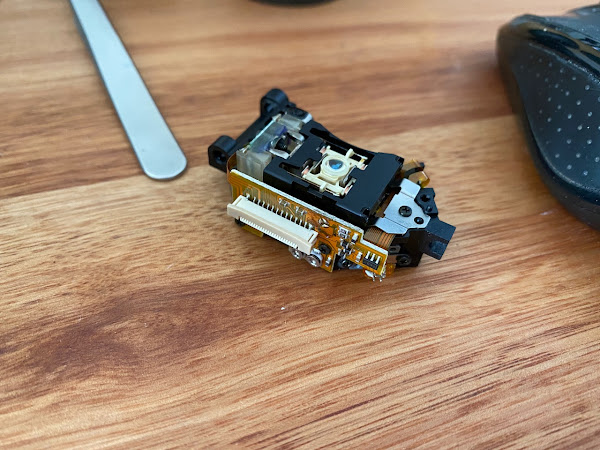 I really do love Dire Straits. Perhaps my favourite Dire Straits album is Love Over Gold. There's a bunch of reasons I love it; it's melodically beautifully put together, there's a nice variety of different styles, and most importantly it was released in '82, when I was at the tender age of eleven, so I played it rather a lot as an impressionable teen. A whole lot of synapses in my brain are dedicated to this album.

Before I start, all my versions sound pretty good. Telegraph road is one of the most engaging, haunting pieces of music I know of, and they're all good copies. My LP and original release CD, though old, are very well loved and looked after. My SACD version is brand-new. I cannot tell whether the original CD or SACD is playing, and I honestly can only tell the LP because of the pops and crackles. I can tell the difference with the 1996 CD though - it's louder. I've always really enjoyed the LP. It's probably simply because of the tactile nature of the medium, and the way I sit down in a nice quiet room to listen on a reasonably good stereo, but it has character that I enjoy. But these are subjective evaluations, not objective ones. They deal with my emotions, which are coloured by handling the album in the format in which I first played it. And subjective evaluations are easy to fake.

To evaluate the various versions I first import them into my mac. For that I use a variety of different things, and they are different depending on the medium.

For the LP, I play the LP on a NAD-5120 turntable (one of the later ones with a more conventional tonearm), with Goldring Epic-II moving magnet cartridge at 2.0g force. I run it through the phono amp and preamp in one of my NAD3240PE integrated amplifiers (why yes, I do have a couple of these wonderfully temperamental beasts), then to a Roland FA-77 firewire ADC, then to my mac. I run the ADC at 44.1ksps, 24 bit. The turntable, cartridge, and amplifier, while nothing to write home about, are representative of the better quality but not esoteric kit that was available in the 1980s. It's not the gear that I listened to the album on as a teenager. My parent's HiFi was a Kenwood one (with graphic equaliser!) and I actually only listened to the LP the once, while recording it to tape at 7 1/2" per second on our Akai cross-field reel deck. I was a weird kid, and I'm a weird adult.

For the CDs, I simply rip using itunes on the mac and a CD drive. I save the file as 44.1ksps 16 bit PCM, uncompressed.

Let's work our way through the copies in chronological order. First, the LP. I started this expecting to see a gradual improvement with better equipment, but in reality it's quite a lot more subtle than that. 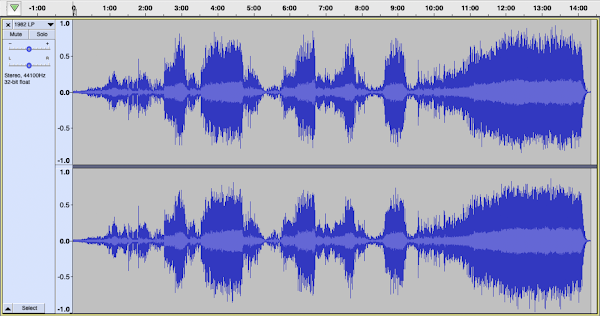 I've trimmed the track to 14 minutes, 22 seconds. The official length is 14 minutes 20 seconds, but I've left perhaps a second either side. When digitised, I kept the gain such that it never clipped. Then I used the Audacity amplify tool to amplify it to 0.1dB from clipping (3.6dB gain, for what it's worth).

MAAT reports the DR as 12, which is generally accepted as very good. I've seen reports of 13 for this track on the original 1982 LP. I may be able to do better with a better cartridge and phono amp. Also I've done nothing yet to clean up the clicks and pops, which may be colouring the result a little.

So next the 1982 CD. I did nothing to the file. Just imported it into Audacity for viewing and ran it through the DR meter as-is. 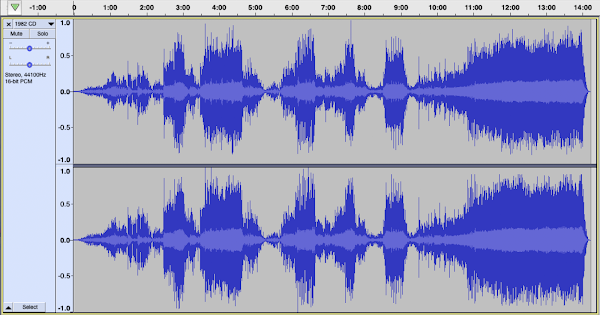 This looks similar to the LP at this level of zoom, which is nice. I note there's a bit of a fade in applied to the first 20 seconds or so.

This is a better result than the LP, with close to a dB better dynamic range. 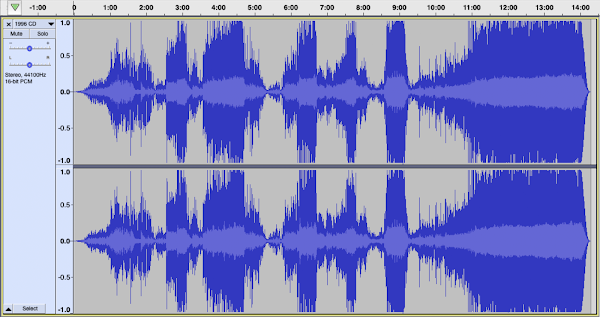 It's pretty obvious to see why this isn't a well-regarded mix. It's certainly subjectively louder than the originals, but that's because of judicious use of compression. Alas the '90's were awash with this sort of awful treatment of audio. 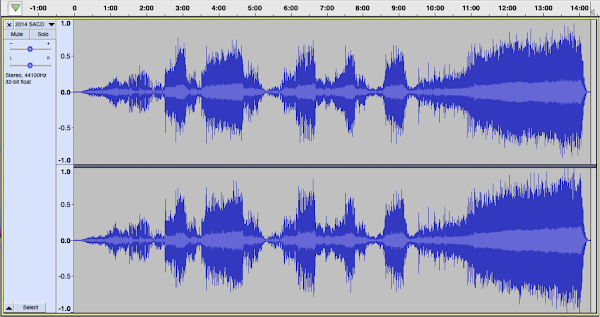 This is interesting when compared to the original LP and CD. Note the gradual increase in gain during the final instrumental passage, up to around 1.5dB for the finale.

I keep looking at the fiddling to the end of the instrumental passage. Could this simply be a cynical attempt to fudge the DR readings? Could the record industry really be that blatant?

What happens if I undo this? On a whim I applied a fade-out of 1.1dB from 11 minutes onwards (I actually added silence to 22 minutes, then selected the audio from 11 minutes to 22, and used the "studio fade out" effect in Audacity, then amplified back to -0.1dB peak: 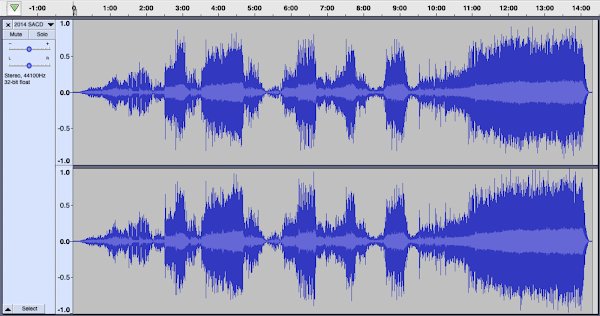 So now it looks... Pletty much exactly like the 1982 CD. MAAT DR Offline Meter reports the following for my "un-tweaked" version:

Which is very close (we're talking within 0.1dB) to the 1982 CD. Enough so that I'm wondering if perhaps this isn't the extent of the "remastering"?

So, what to say? In raw numbers, the SACD wins. But only, I feel, because they cheated. Discounting the cheat the 1982 CD is the winner.

So that's a "whole of track" view showing the really loud bits. One of the really engaging things about this track is the very quiet bits between passages. These don't affect the overall dynamic range figures terribly much, as they're derived by simply taking the difference of the whole-of-track RMS vs peak. If a quiet passage is a few seconds long, it won't have much impact on a 14 minute track. Sections of silence, or near silence, stretch the medium, and are a good indicator of a really good recording. CD should have an overall signal to noise ratio of 96dB, so we should be limited entirely by what the original (analogue) tapes could manage.

The bit I'm interested in comes immediately after the line "There's six lanes of traffic, three lanes moving slow" at about 5:10 into the track. It moves around a little on the various recordings due to small changes in speed, plus slightly varying start times. In any case, there's a very quiet passage, then some piano. Let's examine the second before the first piano note.

Again, we'll start with the LP: 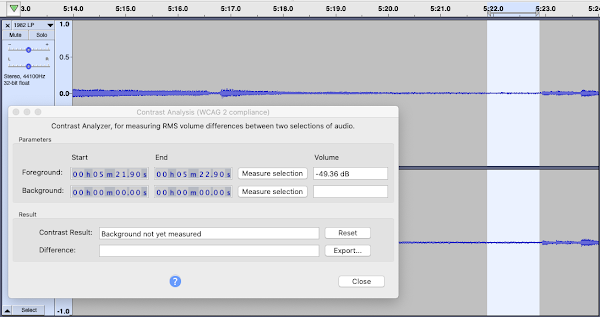 I've simply used the contrast analyser (a power meter) within audacity to show the power in the second before the piano note. -49.36dB is pretty good. Remember this is a media that's full of pops and crackles, and I haven't removed these. 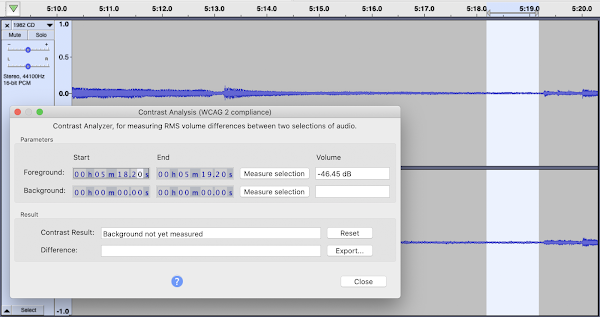 Interestingly, significantly noisier than the LP version, at -46.45dB. Nearly 3dB. This is incredibly strange, as one assumes that CD is much quieter than LP. There must be something else at work here. Perhaps the original master tape has degraded somewhat between the LP pressing and the CD mastering? 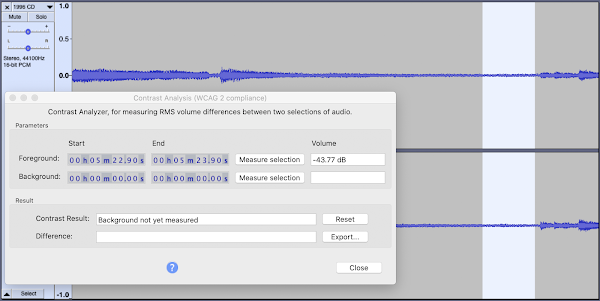 This result of -43.77dB is pretty much what you'd expect from something that's been compressed. The process boosts the quiet bits. Nice for listening to in the car, not really what you want otherwise.

Finally the SACD. I've gone with the version as recorded, with the slowly increasing gain at the end to fudge a better DR value:

Now this is interesting. It's -48.01dB, which is good (though not as good as the LP) on the face of it. However when we recognise that this bit of audio is essentially attenuated by something like 1.5dB, in reality it's about the same as the original 1982 CD. This lends some weight to the hypothesis that the SACD is simply the original CD with a slow increase in gain for the last few minutes.

Examining spectrograms of the quiet bit really throws the difference in noise levels among the different versions into sharp relief. First the LP: 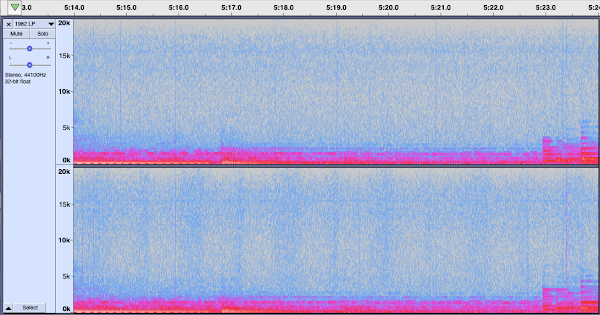 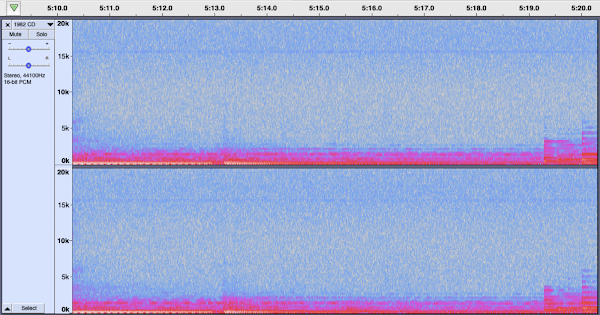 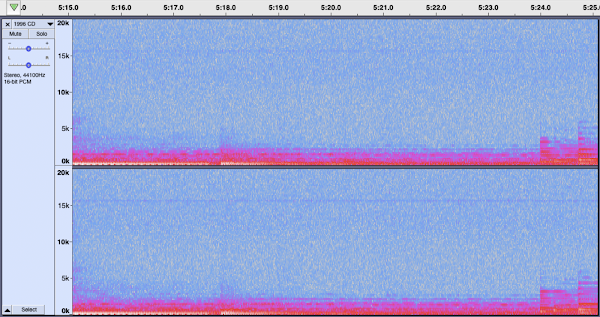 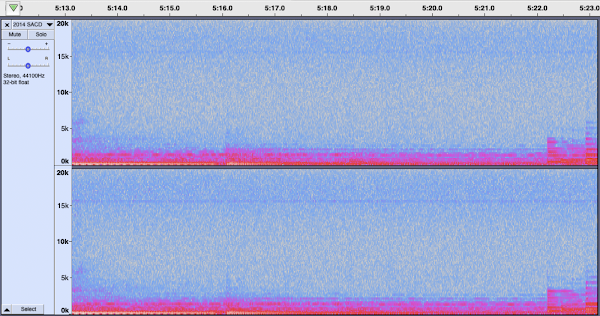 This is maddening. The LP version is obviously quieter than everything else, in between the pops and clicks! The 1982 CD version and SACD version are really the same thing, and the 1996 CD is garbage. Interestingly the liner notes for the '96 CD version go on about "super bit mapping", a technique using HF dithering to reduce the noise level for the lower frequencies. I'd expect to see an increase in noise towards the high frequencies, but I see no such thing. I'm guessing any dithering improvement is completely masked by the noise level of the source, which simply isn't as quiet as the source used for the LP master.
Posted by Suzy at 11:23 1 comment: