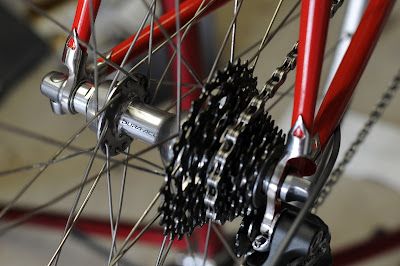 I dropped Ben's frame off last weekend at Cheeky Transport in Newtown, because I know they're one of the few bike shops that has real tools for tapping bottom brackets and reaming head tubes. I do have a reamer for traditional 31.7mm head tubes, but not the 36mm behemoth on Ben's bike.

Today I picked it up, and ran into another local framebuilder, David Bowen of BoBo cycles, who had done the BB tapping, facing, and headtube reaming on Ben's bike for me.

It was neat running into another small-scale framebuilder in Sydney. He showed me a couple of his cool frames. His passion is commuter bikes and fixed wheel bikes, and he does lugs, fillet and even TIG.

Once home, Ben and I threw his Dura-ace group on the frame, and we both got to do a quick ride on the street to see how it feels. It's too big for me, but despite this it still feels lovely and neutral - within a few metres I was able to ride no hands, which is really cool.

The new Dura-ace kit is quite nice to work with. The polished titanium bits and grey anodised aluminium hubs set off the polished dropouts and derailleur tab quite nicely. 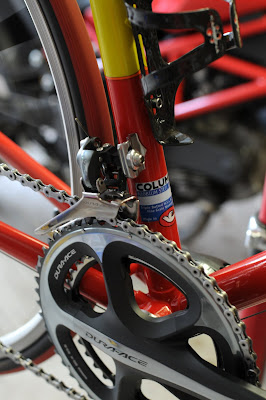 Here's Ben riding his new bike. His plan is to race it in master's races. 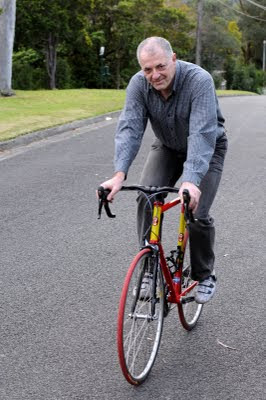