So I made a decision in record time and have ordered plans for Katie, by Harry Bryan.

There's a lovely video tour of Katie available at Off Center Harbour.

Katie is a good compromise between draft and stability. She makes use of a lead keel plus a centerboard. My only reservations with Katie is that the cabin is a tad small (Harry designed her to have a big cockpit instead) and I can tolerate a bit more draft than she has in order to improve stability. So some quick doodling on the picture of the plans that I have to illustrate my changed:

Firstly I scaled her vertically by 105%. This small change adds about 25mm of draft (from 480mm to 505mm) and 25mm of freeboard. It also gives me an extra 50mm of headroom in the cabin.

Then I add ballast to bring her waterline up by 25mm. That resets the freeboard to 480mm, and now my draft is 530mm.

My keel extension will add about 50mm on the bottom of the boat, giving me a total draft of around 580mm. I reckon this is still trailerable. It's certainly a lot less than the 900-1200mm draft of other designs I've been looking at.

Harry mentions that Katie originally suffered from mild weather helm. He cured that in the original by adding keel at the rudder end. I propose extending the centerboard back by around 250mm to deal with this. Additionally because of the taller keel we're able to drop the centerboard down a tad so most of the centerboard case inside the cabin is at floor height.

Finally we simply extend the cabin by moving it's bulkhead back around 500mm.

The results of my doodles is shown below: 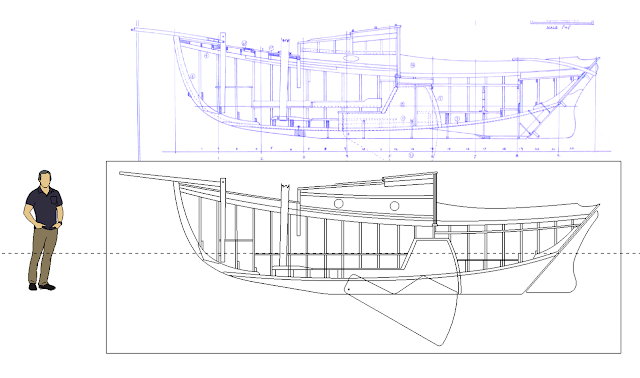