Numbers seven and eight have been started. They're a matching pair of track bikes - one for myself and one for Kristyn. 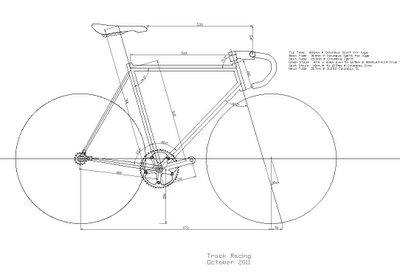 Here's mine - very standard geometry. It's about a cm smaller in many dimensions than my usual roadie. I've increased the head angle to 73.5 degrees, and increased the seat tube angle to 74 degrees. The goal is for a frame that's good for training on the track through winter, so not extremely twitchy - something to do longer events on. 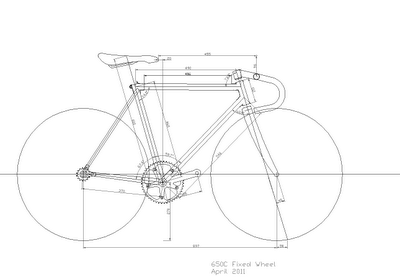 I've already discussed the geometry of Kristyn's. We're using 650c wheels to get the bars down nicely - otherwise it's surprisingly conventional.

Both frames are to be built with Henry James oversize lugs, Keith Anderson dropouts, and mainly Columbus Spirit for lugs tubes. An exception is the chainstays - I'll use True Temper OX Platinum 28 x 20mm ones rather than the more usual 30 x 16mm ones. This should provide a bit more lateral stiffness. 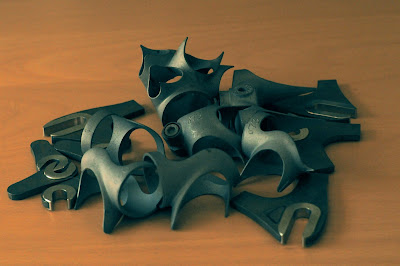 Now to get ordering parts - I already have most of the lugs, but need to get a few from Henry James (a bottom bracket and seat lug), and need to buy the tubes as well.

I admire your work and skill and I learned so much from your blog post. Right now I am trying to design my first frame and I am wondering how you manage the differences from actual lugs angles and the CAD design. On your track frame design the ST angles looks like a 74 and the lug pictured looks a 73. I hope to not annoying you with silly questions.
Thank you,
Sorin

The lugs are easily manipulated (bent) to get them to fit nicely with two or so degrees of latitude from their design angle. The bigger the difference, the more work needs to be done with hammer and drift to set them to the new angle.