Coamings and thinking about rigging

I've been on holidays from work for three weeks, and it's been an incredibly productive time for me. After painting the interior I went straight to work on the coamings. Once the coamings are done I can paint them and paint the decks and timber-work, and the hull is then essentially complete, leaving a much shorter list of things that need to be finished before launch.

Here's the first piece of coaming being glued on. I started with the hardest bit, as I figured this was where I was likely to run into trouble. I used 4mm ply, and oriented it so that the central ply had its grain running along the boat. This made it much easier to bend, which was necessary because that's a really tight radius bend around the front of the cockpit. 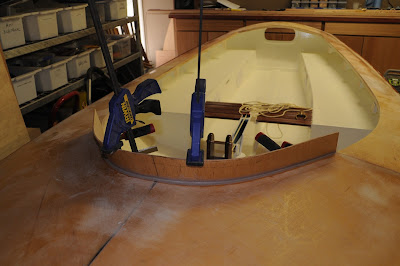 After this piece, I just kept putting pieces on until the cockpit was filled in. Then I went around for another layer. The second layer needs many more clamps than the first, as the glue area is much larger. Here's an example piece going into place. 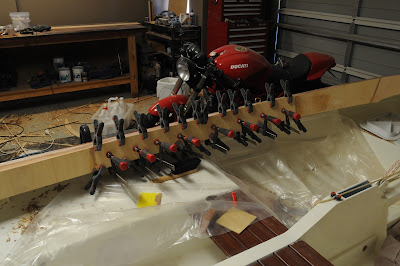 Now I'm starting to turn my attention to all the little detail bits. One of the questions that I'm mulling over at the moment is of how to attach my main sheet. The only other Navigator sloop that I've seen any detail of is Dauntless, which goes for a high-zoot factor traveller across the transom. Wayfarers generally opt for a bridle across the transom, and I'm leaning towards this arrangement, as is seems simple and straightforward.

So now the options of how to locate the ends of the bridle. The photo below shows some of the options I'm mulling: 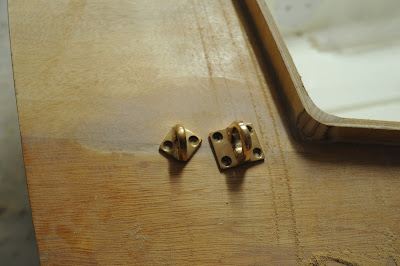 The join in the ply that the eyes are sitting on has a 19mm square Tassie Oak stringer underneath it. At a minimum, I could simply put a pair of #8 by 25mm countersunk screws into this stringer to hold the smaller eye down. For something stronger, I could make a bronze plate up to go under the deck, and use #8 bolts, sandwiching the deck in a similar fashion to what I did with the chainplates. Or I could do the same with the larger four-bolt eye. I suspect the last option is incredible overkill. Indeed I'm suspecting all three options are overkill, but I've sailed on a boat (albeit a 26' one with a cabin-top mounted traveller) watching the traveller coming off the top of the cabin in gusts...
Posted by Suzy at 13:02