I know it's been a while since I last posted an update on my boat progress. It's been pretty hot here, and although our garage is under the roofline of our house, it's got no air-conditioning and gets very hot inside, so my progress has slowed markedly. In any case I have made some progress. Firstly the completion of planking: 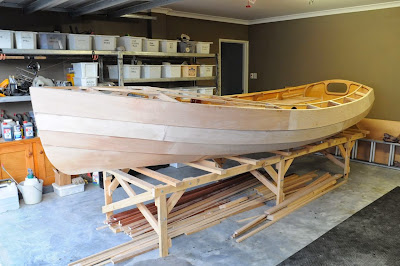 Once planking finished I got down to the seriously boring task of epoxy coating, filleting, and sanding. This is still underway, and won't be finished for a few weeks yet. The interior has lots and lots of corners. I want to put a fillet on as many of those corners as I can, because it looks nice, because it makes the boat immensely strong, and because with a fillet there is no way that I can trap water. 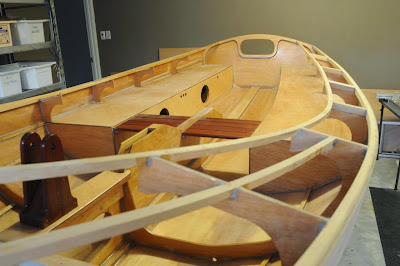 From the bow it looks rather like a boat. 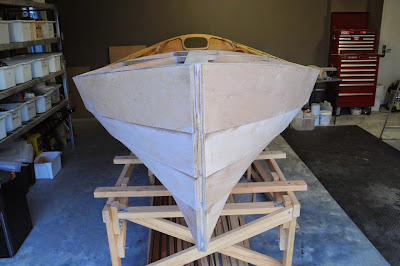 The process for filleting is to mix an extra-thick batch of epoxy and push it in the corners with a paddle-pop stick, then go over it with a larger tongue depressor to remove most of the epoxy and leave a nice clean fillet. Any bits I miss I have to sand down later. There's lots of motivation to clean it up before it goes off, as it's really hard to sand. It's slow because there's an amazing number of corners on the inside of the boat, and because I'm a bit anal-retentive. I'm telling myself that attention to detail at this point will be worth it in the long run, making painting easier and making the boat a whole lot easier to maintain.

If I try to do too much at once, the epoxy heats up in the pot, which makes it go runny, and then rapidly go everywhere but where I want it, so I have to work methodically with small batches. Anybody who knows me will know that methodical just isn't me. 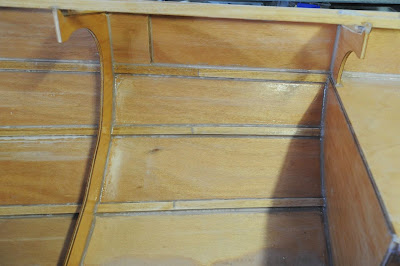 I also finished off the centreboard pivot. It ended up reasonably straightforward. a 19mm diameter length of bronze rod, which fits into some turned flanges. The flanges have a groove in which a 19mm x 3.2mm o-ring sits, and the whole lot is held together by a turned cap, made from silicon bronze, and held in place with a 10-24 silicon bronze screw either end. There's no need for massive axial strength - the screw simply locates the pivot and holds the caps down, which in turn press the o-rings into their grooves and hopefully keep water out. Please expose the fillet booger. 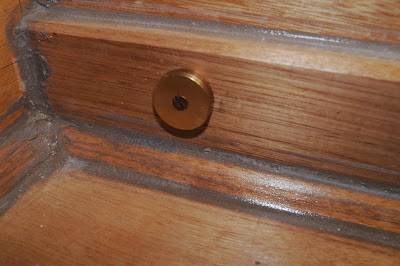 Here's a photo showing the cap taken off, exposing the o-ring. I'm hoping this is plenty strong and keeps water out of the cockpit. 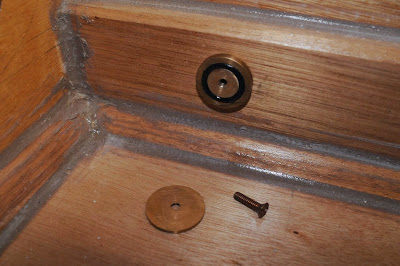 It's really coming together now! I don't even like boats and I'm impressed with how it looks.
The care and attention you put in to all your projects wouldn't make me think you're not methodical, I just hope you make some more bikes some day.