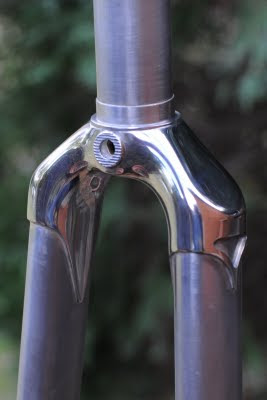 I've never built a fork before. I've built five frames, but never a fork. The reasoning was quite simple. A steel fork weighs around 600-750g, depending on steerer length. A full-carbon fork weighs 350-400g (ones with steel steerers are generally just as heavy as steel forks, as all the weight is in the steerer). Carbon forks are cheap and plentiful, and work quite well.

Keith's bike, though, just won't work with a carbon fork. With polished lugs, sticking a bit of black plastic on would just ruin the aesthetics. So I decided to take the plunge and build a fork. Given that it's my first, I stuck to the basics - a 1" EL steerer, raked stainless crown, Nivacrom blades, and Dazza's gorgeous dropouts.

First step (documented previously) was to braze the steerer to the crown with 56% silver filler and stainless light flux. I then turned the crown race seat and gave the crown a polish.

Next I cut the small end of the blades down until they fit neatly in the sockets of the dropouts, cut the other end to length, and assembled the fork in a jig. I then brazed the dropouts to the blades, again with 56% silver filler and stainless light flux. 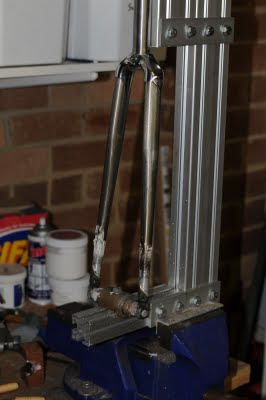 Once the dropouts had a handle, I took the opportunity to file, sand, and polish them. 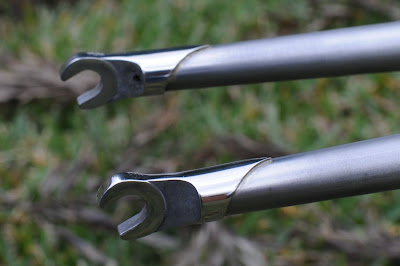 I then set the crown sockets so the blades fit neatly, jigged the fork up, and brazed the blades into the crown. Having the jig upside down was very helpful here, as it encouraged the silver to flow right into the join. Again, 56% silver filler and stainless light flux. 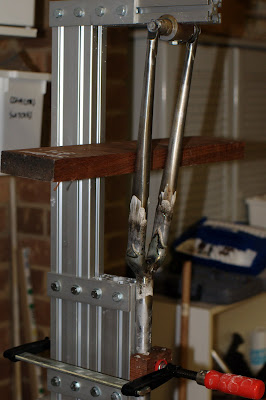 I wasn't happy with the thickness of the crown where it joins the blades, so I took to it with a file and thinned it out a little, then sanded and polished it.

Here's the final result. For a first go I think it turned out pretty well. 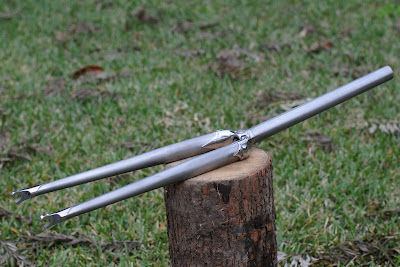