Playing with paint, finishing the rowing thwart, sharpening my spokeshave, and centerboard pivot

A bit of a laundry list this week. I'm saving some money to buy Jarrah for laminating on my transom, so have been doing other bits and pieces in the meantime. Firstly I thought I'd have a thorough play with my new aquacote paint, and use it to paint my centerboard.

I've used epoxy paints before, I've used water based paints, and I've used polyurethanes. This stuff is a bit of a mix of all of the above. The undercoat is a two part waterbased epoxy. No isocyanates as far as I can tell (yay!), and simplified clean up because you can flush most of the mess out with water. There's a brush-clogging residue left though that has to be removed with epoxy thinners.

This stuff is extremely thick. It builds quicker than any paint I've used before, and refuses to level. I used a 5mm nap roller to put the first layer on, then tried a brush for the second coat. I think I'll try thinning it out rather more than the recommended 10% next time, to save myself quite a bit of sanding.

Based on my experience with the undercoat, I tried spraying the top coats, a polyurethane with a cross-linker that you bung in just before going to work. Again, 10% thinning as recommended is nowhere near enough. It sets up in mere minutes. I can see a path to gloss without buffing, but I've got a ways to go before I reach that. Anyway, here's the centerboard. From two feet it looks fantastic. Just don't look too closely! 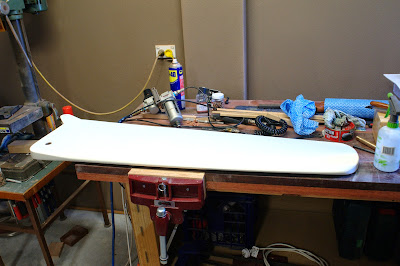 I finished the rowing thwart and Mogget immediately decided it was the perfect perch. He's been sitting there all day, and I haven't the heart to move him to take a photo. 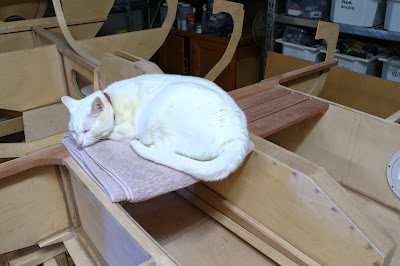 I also installed inspection hatches in the cockpit seat fronts, plus lots of bits of Tassie Oak reinforcing for the cockpit seats, and lots of epoxy fillets. I'm hoping that if I'm really methodical in filleting everything that's supposed to be watertight, then they will be. Watertight, that is. 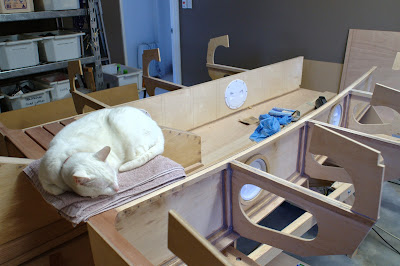 All this work left my new spokeshave rather blunt. The blade is very short and won't fit in my honing guide. I fashioned a little adapter from some scrap aluminium so I can fit it in, with an indexing thingy to ensure it's held at the right angle: 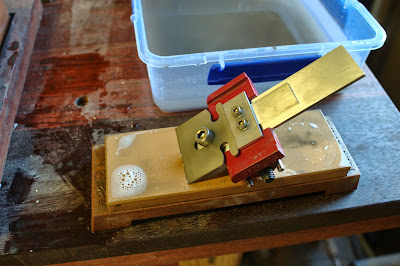 With it securely held in the guide, my new Japanese waterstones do a sterling job of honing the blade. This Veritas spokeshave is just such an amazing jewel of a tool. I can see myself buying more in the future. 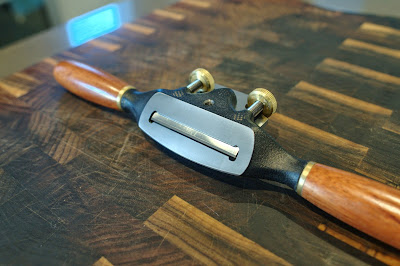 Last but not least, I turned up a pivot pin and bushings for my centerboard out of phosphor bronze. The pivot is 19mm diameter, and the OD of the bushings is 25mm. Should be plenty strong. Alas nobody I know has a 5/8" UNC die I can blag to make the threads, so I'm going to have to buy one. This is a much closer view of the centerboard, and you can see the imperfections in the paint. To be honest I'm not sure how perfect a boat has to be. I'm used to painting really over the top stuff (bicycles and motorbikes, which get people looking from a few inches). The boats I've sailed have been rather rough and ready, and worked fine. This centerboard is going to be under the boat, and is likely going to be smacked against rocks and sand. I think I'm just going to have to shove my OCD in a box and get on with it. I can let my OCD back out for stuff that's really visible. 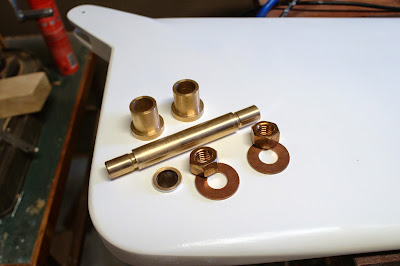