The inevitable conclusion when you're drawn to water.

One of the nicest parts about living in Geraldton is the easy proximity to the Indian ocean. The beach is about a hundred metres walk, easily done in togs and thongs. There's a boat ramp maybe 300m away. When I put my toggs on, my cat starts meowing, as he knows that I'll bring home half a dozen pippis from the beach.

Years ago when riding in Sydney, my daughter commented that I was "drawn to water". Part of that is because all the good rides; Brooklyn, Akuna, Bobbo, McCarrs Creek etc involve riding past marinas, but the truth is she's right. I really love the water. Since we've been over here I've been closer than at any point in my life to the ocean, but unlike Sydney where I could blag a sail on a friend's yacht at short notice, here not so much.

So the inevitable conclusion from this conjunction: Build a boat. How could I not have seen it sooner.

Perry and I started the process by measuring the garage. 5.5m long. It's really gotta fit in there, at least while we're building it. That puts some constraints on the project straight away. Next, it's gotta be trailerable, as there are no moorings near here and marina berths are way too spendy for us. Gotta be quite easy to sail, as I'm a bit of a novice sailer, and have to admit I've never actually captained a boat. Neither has Perry.

Perry's really keen on rowing, and I'm really averse to noisy, smelly, unreliable outboards. That means rowability is important. Not for the main means of propulsion, but more as an auxiliary function, to get us on and off the trailer, as backup in case the wind isn't blowing, etc.

It's gotta be plenty seaworthy, as there are no sheltered lakes or harbours here. Sailing means the ocean. Admittedly there are plenty of offshore reefs to keep the swell down, but there's also the Geraldton Southerlies to contend with. They don't call this "the shipwreck coast" for nothing. Actually, they call WA the shipwreck coast because early sailors had no reliable way to reckon their longitude, so ran into it rather more than they would have liked. Oh, and did I mention reefs. We'd also like enough room to overnight on, so we're getting pretty specific.

So after some mucking about, searching the web, and harassing people, I found the John Welsford Navigator. This is a lovely little 4.5m partly decked dinghy, with a whopping 1.8m beam. Most Navigators are rigged as a yawl, with a titchy main and a little mizzen up the back, but there's an option for a real sloop too.

A couple of quick emails had the plans winging their way to me, and I set to work.

Now nothing is perfect, and even before I'd ordered the plans I had a bit of a list of optimisations that I wanted to do to customise the design to our specific needs. Most of them revolve around the centerboard. The Navigator's centerboard is relatively short, with plenty of chord. This means you're less likely to smack it into the bottom of lakes and rivers, but means the case sticks up a very long way into the boat. Much higher than the seat level, some 15cm higher in fact. This has profound implications on rowability. I'm told you can just sit on the centerboard case and have at it, but I'm not terribly short and can see myself smacking my head on the boom rather a lot. Also, long slender centerboards are allegedly more efficient, have more righting moment (especially if you cast the tip in lead), and just look cooler. Not that boats with short centerboards can't be pretty though. Here's a particularly pretty example, Arwen: 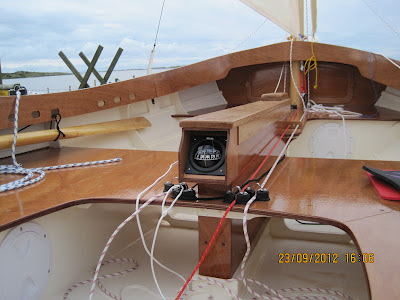 There's a limit though. They have to be strong enough to cope with the idiot who just capsized the boat standing on the end to right it. Nothing a bit of unidirectional carbon fibre can't improve though...

Rather than building the boat and trying to figure all the changes out as I went along, I thought it prudent to make a model first. Most people make cute little 1:10 odd models in wood. Not me. I went the digital route. I'm a tight-arse though, so I did it in free software (Google sketchup). The process is actually pretty straightforward. Draw the bulkheads in 2D, extrude them to their thickness. Draw the keel plank and position the bulkheads along it. Then draw fair curves where the stringers go, and start filling in the gaps.

Drawing fair curves in Sketchup is fiddly, as it has no spline tool, but with patience (I erased everything and started from scratch twice) you can get a pretty good approximation of a hull. Systematic use of curves is the key, remembering that every curve has 12 line segments, and that you can get curves to launch smoothly off the end of other curves.

And what curves! There's not a straight line in sight.

Then just add detail, add detail, add detail, until you go a little nuts. I let the full force of my considerable OCD loose on the problem, and as a result I've got a reasonably good model that I can work with. The hull shape, planking and bulkhead position is exactly as Welsford intended. I've made some detail changes to bulkheads 4 and aft, and obviously designed the centerboard and case pretty-much from scratch. It's resulted in a seat position 20mm above Welsford's design. It's still a work in progress. I'm currently missing the rudder, tiller, bowsprit, coaming, foresail, and stupendous amounts of rigging. It's got all those sexy boat shapes though.

To give some more space in the cockpit (insert dreams of dropping seal, chucking the sea anchor overboard and climbing into my sleeping bag on the floor during a passage) I deleted the aft thwart (what use is a thwart there anyway when the tiller goes straight across it?). I narrowed the cockpit seats by 20mm, and narrowed the center (now rowing) thwart from about 600mm to just 300mm. My centerboard has a 300mm chord and 1000mm length, and is about 40mm thick at the root, tapering to about 25mm at the tip. Should be a hoot to make. Importantly though the centerboard case is now level with the top of the rowing thwart, which should improve rowability immeasurably.

Incidentally I'm not the only one to think of centerboard mods. Dauntless also has a longer centerboard with less chord, not so much for rowability as for more (or is that moar?) speed. That's one sexy boat, and the only one I've seen so far with a proper sloop rig.

I spent some time carefully modelling the up-haul, so I could be sure there was enough space between the mast and centerboard uphaul linkage for blocks. To simplify things a little I've buried one of the blocks inside the centerboard itself at the pivot. This arrangement gives me a straightforward 3:1 purchase. I've located the cleat on top of the case, forward of the rowing thwart so you don't sit on it. You can see it in the drawing, with the cat peering intently at it.

So there's where I'm up to as of today. As finances allow, we'll be buying huge quantities of marine plywood, hoop pine, epoxy, fiberglass, carbon, then mast, boom, sails, rigging, safety gear...