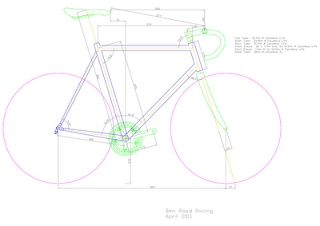 So construction has started on number five. This is a road racing frame for a friend, Ben. It'll be a 57cm square design, with short 41cm chain stays and a 73 degree seat tube angle. The 72.5 degree head tube and 45mm fork rake will make for a reasonably fast handling bike without being a handful - just the thing for road racing.

Ben wants a nice, stiff bike, so we decided to build with XL tubes - that means a 31.7mm seat tube and top tube, with a 35mm downtube and 36mm head tube. It'll be compatible with 1 1/8" steerers, so getting a fork that fits should be a doddle. I confess I have my doubts about the aesthetics of XL tubes. I prefer the slightly more traditional look of OS tubes myself (28.6mm seat and top, 31.7mm head and down). That said, in a 57cm bike, the XL tubes probably won't look too out of proportion.

Tubeset is Columbus Life, courtesy of Peter at Ceeway. The butt lengths work out quite well for lugs, on account of the frame being a little larger than average. I'm building with Llewellyn Cadenzia XLH lugs, which have a nice classic Bocama style shape. I'll probably do a little lug carving on this one, to make them look just a little skimpier.

Ben uses Shimano parts, so I'll cut the STI bosses off the lower head lug and attach some Llewellyn ones to the downtube.

I really loved using the Llewellyn stainless dropouts last time, so will use the same ones (in a 72 degree angle) for this frame.

I bought some Sachs front derailleur bosses as well, but it looks like (unlike the Silva parts I've used previously, which are amenable to bending to fit different diameter tubes) the Sachs bosses are for 28.6mm downtubes only. A pity, as these are about the sexiest little pieces of metal I've ever laid eyes on.

So far I have all the tubes, the BB (Long Shen), and the miscellaneous bridges and bosses, from Ceeway. I expect the Lugs from Llewellyn any moment, and will start cutting once they arrive.
Posted by Suzy at 16:02

Suzy, this is looking like a fun project. Do you think it would be possible to heat up that Sachs front derailleur mount and re-shape it around a mandrel for diameter 31.7 ?
Oldbikerider.

In post #9 in this thread http://www.velocipedesalon.com/forum/f10/sram-road-front-braze-derailleur-spec-not-compatible-industry-standard-19807.html Dazza talks about using a Sachs mount on 31.8 tube. The thread also points out some potential derailleur travel issues, although not with Shimano.

Hey, thanks for that. I might try some experimental bending with the ones I've got.

Hey Suzy,
Did you notice these? Are they what you need here?
http://www.velocipedesalon.com/forum/f10/more-uos-parts-news-atmo-22043.html